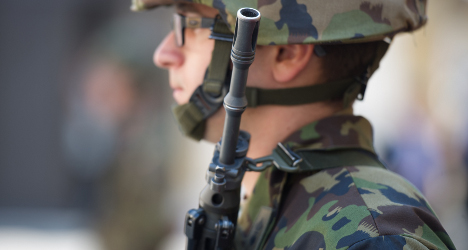 The man, from St Gallen in north-east Switzerland, was doing his military service in 2014 when he put his gun in the boot of his car following a shooting practice session, 20 Minutes reports.

As per military rules, he separated the barrel from the gun and returned home, taking the barrel into the house but forgetting the gun.

He then drove over the border for a day trip to German theme park Europa-Park, near Rust in south-west Germany.

However on the way back he was stopped at a border-crossing between Basel and Weil am Rhein and the gun was seized.

Despite the man pleading forgetfulness, he was found guilty by a German court for violating gun laws, according to local media.

According to 20 Minutes the unfortunate recruit has since left the military and is undertaking civil service instead.

He is not the only Swiss army recruit to have ‘forgotten’ about his gun. In February this year concerns were raised after a report revealed that Swiss soldiers left behind 18 firearms on trains in the first nine months of 2015.

Military or civil service is an obligation for all able-bodied Swiss men, while women can volunteer to serve.

Annual shooting practice sessions remain a requirement for all military service recruits up to the age of 34.

Recruits are allowed to keep their guns at home after their military service obligations end, should they acquire the necessary permit, though they are not allowed to keep army-issued ammunition.

In 2011 a referendum to place further restrictions on gun ownership was rejected by the public.