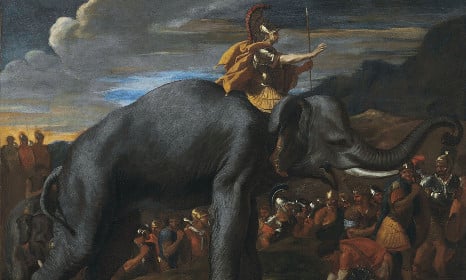 Genetic sequencing of dung found in the Alps could help pinpoint the route taken by Hannibal.

Hanninbal’s feat in leading some 30,000 troops, 15,000 horses and 37 elephants over the Alps to invade Rome is the stuff of legend.

But the actual route taken by the general who engaged a long and bloody war against the Roman Empire has remained hotly disputed.

Now, however, an international team believe the vast Carthaginian army passed over the 3,000-metre Col de la Traversette on the border between modern-day France and Italy.

Those claims are based on data including microbial analysis of a huge deposit of what researchers believe is horse dung found near a pond.

That pond, or mire, is described as one of only a few in the region that would have served to water the number of animals used by Hannibal’s army.

Carbon dating places the age of the dung squarely during the period when Hannibal was crossing the Alps – in 218 BC.

The terrain around the Col de Traversette also lines up with descriptions of the treacherous crossing provided by Roman writer Livy.

The finding suggests the Carthaginian army passed a fair way south of what is now Switzerland and puts paid to a long-cherished story that Hannibal and his elephants made their way over Switzerland’s Great St Bernard Pass.

While the Great St Bernard Pass is not the most popular alternative among historians, it has been put forward as a possible option because it was the least dangerous route, according to Swiss daily Le Tribune de Genève.

In fact, the researchers behind the new study are not sure why Hannibal would have chosen the very tricky Col de Traversette over other routes, although one member of the team says the general from Carthage may have wished to avoid being ambushed by tribes in Gaul.

The team behind the new findings are not rushing to conclusions though. They are now planning to do more genetic studies to confirm if the dung found on the pass is actually from horses or humans.

They also hope to find genetic evidence of parasite eggs linked to tapeworm, evidence that could solve a 2,000-year-old mystery once and for all.