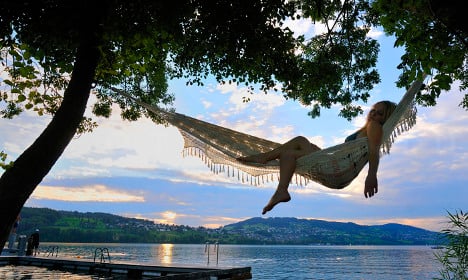 Relaxing on Lake Hallwil in the cash-rich canton of Schwyz. Photo: Swiss Tourism

The extremely high figure is closely connected to low tax rates in Switzerland.

But even within the wealthy Alpine nation there are large inequalities in purchasing power, again partly because regional tax rates vary by a substantial degree.

At the top of the cantonal table is tax-friendly Zug where the average purchasing power per resident is €64,990 or more than one and a half times the Swiss average.

The central Swiss cantons of Schwyz and Nidwalden take out second and third spots while Zurich and Geneva come in fourth and fifth. Purchasing power in Switzerland, according to Gfk. Image: Gfk

At the other end of the scale are the cantons of Glarus, Uri and the Jura. But even Jura, with an average purchasing power per resident of €34,095 is wealthier than the richest district in Germany of Starnberg where the figure is €31,850.

Zooming in to the municipal level, Gfk says the richest Swiss live in Hoefe in canton Schwyz.  Here is the average purchasing power is a huge €94,073, or a long way ahead of second placed Meilen in Zurich where the figure is €65,825.

Gfk bases its purchasing power figures on region-specific net income levels as well as any government benefits received. However, costs including rent, insurance and general living expenses are not factored in.

Its new figures come in the wake of Credit Suisse's Global Wealth Report 2015 which calculated that adults in Switzerland have an average wealth of $567,100, the highest in the world and well ahead of second placed New Zealand ($400,811).

However, authors noted the fact that Swiss wealth is disproportionately owned by a few at the top of the wealth pyramid.

Another 2015 study carried out by Swiss bank UBS showed that residents of the cities of Zurich and Geneva had both the highest purchasing power and the highest wages in the world.

That same study found, however, that Zurich was the second most expensive city in the world behind New York City while Geneva was the world’s third priciest city.