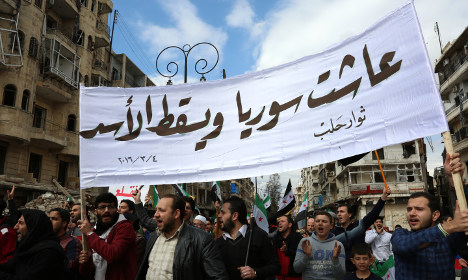 Syrian civilians and activists hold a banner reading in Arabic "Long live Syria, down with Assad" during an anti-regime demonstration. Photo: AFP

HNC representatives said the indirect negotiations could collapse if the regime refuses to compromise on political and humanitarian issues.

“We might suspend (our participation in) the talks if things carry on this way, and then there will be no prospect for any political solution,” HNC member Abdulhakim Bashar told AFP.

Syria's government and the HNC arrived in Geneva last week for a fresh round of talks held by UN special envoy Staffan de Mistura.

The HNC has questioned the regime's commitment to a political solution to Syria's five-year war, particularly in the wake of renewed violence in the northern province of Aleppo.

A Russian-backed government offensive near the provincial capital of Aleppo city has also strained a shaky ceasefire in place since February 27th.

“The humanitarian situation is continually deteriorating, the issue of the detainees has not seen any progress, the ceasefire has almost collapsed, and now there is an attack on Aleppo from three sides,” Bashar said.

“Given these factors, we are reviewing everything, and we will continue our meetings today so that tomorrow we can decide what to do.”

A second member of the HNC delegation, speaking anonymously because he was not authorised to make press statements, said the talks were nearly at “an impasse”.

“The negotiations have nearly reached an impasse with the intransigent regime's refusal to negotiate the fate of Assad in the Geneva talks,” the member said.

He warned that the current round “is at risk of failing” if world powers, especially the United States and Russia, did not put pressure on Damascus.

Assad's fate has remained the main sticking point in peace talks, with Syria's opposition clinging onto its call for his ouster since the conflict broke out in 2011.

But the regime has rejected the embattled leader's departure, calling his fate “a red line”.

More than 270,000 people have died in Syria's war, and millions more have been displaced.

World powers thrown their weight behind UN envoy Staffan de Mister's efforts to put an end to the conflict, but little progress has been made.