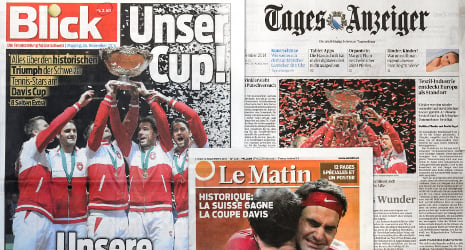 The alpine country moved up 13 places from 20th last year to seventh in this year’s World Press Freedom Index, which ranks 180 countries according to the freedom allowed journalists.

However RSF's Swiss office said in a statement that Switzerland’s high ranking mainly results from other countries dropping down the table – including Germany, Canada and the Czech Republic – and a lack of serious court cases last year in which Swiss press freedoms have been tested.

“It is also positive to note that the parliament of the canton of Graubünden decided in 2015 to adopt a freedom of information act,” it said, but added that similar initiatives in other cantons “have unfortunately failed”.

However it pointed to Swiss banking secrecy laws as an ongoing point of contention.

“Publishing leaks concerning ‘confidential official discussions’, especially involving banking, is regarded as a crime in this country of bankers,” it said.

Switzerland has a long tradition of banking secrecy that dates back to a federal law of 1934, however there have been attempts to increase transparency in recent years.

Last year Switzerland and the EU signed an agreement to automatically exchange information on the bank accounts of each other’s residents, starting in 2018.

However in November last year the UK-based Tax Justice Network said Switzerland was the least financially transparent country in the world.

“Despite what you may have heard, Swiss banking secrecy is far from dead, though it has curbed its secrecy somewhat,” the TJN said, calling Switzerland “the grandfather of the world’s secretive tax havens”.

Published annually since 2002, the World Press Freedom Index is compiled by a questionnaire completed by experts around the world that measures pluralism, media independence, the quality of the legal framework and the safety of journalists.

Though Switzerland’s rise in the 2016 report is a great improvement on last year’s 20th place, as recently as 2010 the country came first in the index.

This year Finland topped the index for the sixth year in a row, followed by the Netherlands, Norway, Denmark and New Zealand.

Countries that fell the furthest included Poland, Tadjikistan and Brunei.

Globally, the situation regarding media freedom violations deteriorated by 3.71 percent, said the report.

Most of the movement in the 2016 report indicates “a climate of fear and tension combined with increasing control over newsrooms by governments and private-sector interests”, RSF said.

The full report can be accessed here.