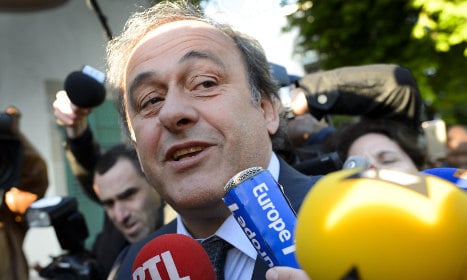 The stakes could not be higher for the 60-year-old former French international, who led Europe's powerful football confederation and was favoured to take charge of world governing body FIFA before his dramatic
downfall last year.

If CAS overturns the ethics violation verdict imposed by FIFA judges, then Platini could be at the Stade de France for the Euro 2016 opener between hosts France and Romania on June 10th.

A negative verdict will see his glittering career in the sport brought to an ignominious halt.

“Today the match begins, a new match, the final, and we are all on the same page. I'm optimistic, we're going to win,” Platini told reporters.

The Frenchman has been sanctioned over an infamous two million Swiss franc ($2 million, 1.8 million euro) payment he received in 2011 from then-FIFA president Blatter.

FIFA's ethics committee in December banned both men from all football activities for eight years. The suspensions were cut to six years in February.

Both men insist they did nothing wrong and that the payment was part of a legitimate oral contract tied to consulting work that Platini did for FIFA between 1999 and 2002.

Blatter entered the court in the Swiss city of Lausanne around 10:40 am (0840 GMT) and told reporters he was “happy” to testify in the case, following a request from FIFA.

“It will be nice to see Michel Platini again,” Blatter said. “It has been a while since I've seen him.”

He left roughly 90 minutes later, describing the process as “fair (and) very proper.”

Blatter said he was questioned by FIFA lawyers, Platini's camp and a panel of judges.

“I hope that my participation has helped to find a solution to this problem,” Blatter said, declining to discuss specifics of his testimony.

Blatter and Platini, once the most powerful figures in world football, were once considered strong allies but their relationship publicly frayed as Blatter repeatedly refused to cede the FIFA presidency.

The murky two million Swiss franc payment ultimately destroyed Platini's chances of replacing Blatter as the Frenchman was forced to pull out of the race to become FIFA president in an election won by his number two at UEFA, Gianni Infantino.

UEFA has said it will not replace Platini until all his appeals are exhausted, so if the former French star is successful at CAS he could reclaim his job in time to preside over Euro 2016.

Platini's entourage is hoping for a decision “before May 3rd” when UEFA holds its congress in Budapest.

Blatter has also appealed to CAS and is awaiting a date for his hearing.

“This is the last avenue of appeal,” Platini's lawyer Thibaud D'Ales conceded to AFP.

The CAS consists of three legal experts, one each representing Platini and FIFA and a president.

The hearing will be chaired by Luigi Fumagalli, a University of Milan-educated Italian international law expert.

As part of his defence Platini's legal team will produce an invoice for the suspect payment in an attempt to prove there was nothing untoward about the transaction.

“Five people from the offices of FIFA were involved in this payment, which was processed by the Finance Committee and reported to the Executive Committee. It is far from a hidden payment,” said D'Ales.

Platini's name has also emerged in the Panama Papers, a leaked set of 11.5 million documents that provide detailed information about more than 214,000 offshore companies listed by the Panamanian corporate service provider Mossack Fonseca.

But D'Ales denied this had any relevance to Friday's hearing.

“His fiscal situation was known by the Swiss authorities. This has nothing to do with it.”