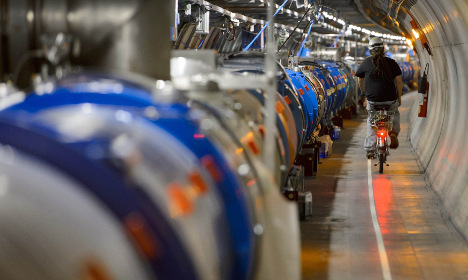 It will take a few days to repair the damage caused by the weasel, which did not survive its high-voltage encounter. Photo: AFP

The collider suffered a “severe electrical perturbation” at 5:30 am (0330 GMT) Friday, the European Organization for Nuclear Research (CERN) said in its daily summary of activity at the giant lab straddling the French-Swiss border.

It said the cause was a “short circuit caused by fouine (weasel)” on a 66-kilovolt transformer, adding that its connections sustained some damage.

CERN spokesman Arnaud Marsollier told the BBC it would take a few days to repair the damage caused by the weasel, which did not survive its high-voltage encounter.

“Not the best week for LHC!” CERN said in its summary.

Experiments at the collider are aimed at unlocking clues about how the universe came into existence by studying fundamental particles, the building blocks of all matter, and the forces that control them.

The LHC, housed in a 27-kilometre (17-mile) tunnel, was used to prove the existence of the Higgs Boson, also known as the God particle, which confers mass.

That discovery earned the 2013 Nobel physics prize for two of the scientists who had theorised the existence of the Higgs back in 1964.

It later underwent a two-year upgrade to double its energy levels.

The LHC allows beams containing billions of protons to shoot through the massive collider in opposite directions.

The sub-atomic rubble is then scrutinised for novel particles and the forces that hold them together.