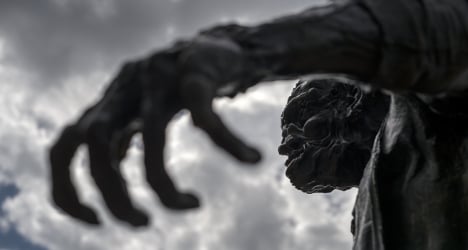 To mark 200 years since English author Mary Shelley first imagined the ultimate horror story during a visit to a frigid, rain-drenched Switzerland, an exhibit opens in Geneva on Friday called “Frankenstein, Creation of Darkness”.

In the dimly-lit, expansive basement at the Martin Bodmer Foundation, a long row of glass cases holds 15 hand-written, yellowed pages from a notebook where Shelley in 1816 wrote the first version of what is considered a masterpiece of romantic literature.

“… I beheld the wretch — the miserable monster whom I had created; he held up the curtain, and his eyes, if eyes they may be called, were fixed on me,” she wrote.

The idea for her “miserable monster” came when at just 18 she and her future husband, English poet Percy Bysshe Shelley, went to a summer home — the Villa Diodati — rented by literary great Lord Byron on the outskirts of Geneva.

The current private owners of the picturesque manor overlooking Lake Geneva will also open their lush gardens to guided tours during the nearby exhibit which runs to October 9th.

While the spot today is lovely, with pink and purple lilacs spilling from the terraces and gravel walkways winding through rose-covered arches, in the summer of 1816 the atmosphere was more somber.

A massive eruption from the Tambora volcano in Indonesia wreaked havoc with the global climate that year, and a weather report for Geneva in June on display at the exhibit mentions “not a single leaf” had yet appeared on the oak trees.

To pass the time, poet Lord Byron challenged the band of literary bohemians gathered at the villa to each invent a ghost story, resulting in several famous pieces of writing.

English doctor and author John Polidori came up with the idea for The Vampyre, which was published three years later and is considered to have pioneered the romantic vampyre genre, including works like Bram Stoker's Dracula.

That book figures among a multitude of first editions at the Geneva exhibit, including three copies of Mary Shelley's Frankenstein, or the Modern Prometheus — the most famous story to emerge from the competition.

When first published in 1818 it did not bear Shelley's name, and one of the yellowed editions in the exhibit, presented as a gift to the man who sparked its creation, is inscribed merely “To Lord Byron from the Author”.

“Her name was unknown. It would not have done anything for the sale of the book. Especially a feminine name,” explained David Spurr, an English literature professor at the University of Geneva and curator of the exhibit.

Despite her young age, Mary Shelley — the daughter of political philosopher William Godwin and feminist philosopher Mary Wollstonecraft — tapped into widespread angst about the increasing power of science and technology.

Shelley does not reveal in her book the secret “spark of being” that Victor Frankenstein discovers and uses to bring his creature to life, but the result of his hubris is depicted in all its horror.

Rejected by its maker, the creature turns into a vengeful monster who murders Frankenstein's baby brother, his best friend and his love the night before their wedding.

More than simply marking the 200th anniversary of the conception of Frankenstein, Spurr said the exhibit along with a range of activities seek to highlight how relevant the novel remains as science and technology advance at breakneck speed.

“The fundamental questions raised about science and about the human capacity to create human life, or to modify or to intervene in the process of the creation of human life … are still very actual and are still a source of anxiety,” he said, pointing for instance to DNA research and tinkering with human reproduction.

“How far can scientific creativity go without trying to play God, or creating something that will be a scourge for humanity?” he asked.