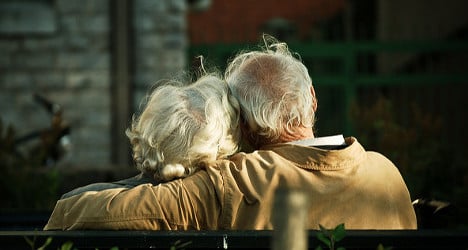 The World Health Statistics report, released on Thursday, shows that a boy born in Switzerland in 2015 can expect to live on average 81.3 years, longer than men in any other of the 194 countries studied.

Swiss men live a whole 12 years longer than the global average, which stands at 69.1.

Swiss women don’t do too badly either, with a projected life expectancy of 85.3 years, putting them sixth in the world behind women in Spain, France, Singapore, South Korea and front-runners Japan, where women can expect to live longer than anyone else on the planet.

When combined, the life expectancy average for both men and women in Switzerland is 83.4 years, placing the country second only behind Japan.

With its good health service, high standard of living, pro-family society and promotion of an active lifestyle, Switzerland frequently tops rankings related to health and aging.

Speaking to The Local, Simeon Bennett, spokesman for WHO, said: “As a general rule, nations with high life expectancy tend to have higher incomes, higher levels of health service coverage, higher standards of living, and healthier lifestyles and diets than those with low life expectancy.”

In September Switzerland beat all others in a global ranking of the best places to grow old.

And in February 2015 another study showed the country to be the best place to spend your retirement. The Global Retirement Index praised Switzerland’s health service for increasing life expectancy.

Overall, global  life expectancy increased by five years between 2000 and 2015 said WHO, the fastest increase since the 1960s.

But figures vary widely. While babies in 29 countries can expect to see their 80th birthday, those in 22 others, all in sub-Saharan Africa, have an average life expectancy below 60 years.

People in Sierra Leone have the world’s lowest life expectancy, of 50.8 percent for men and 49.3 years for men, found the report.

However improvements in the treatment and prevention of AIDS, malaria and other diseases have boosted life expectancy in the African continent by 9.4 years since 2000, said WHO.

“The world has made great strides in reducing the needless suffering and premature deaths that arise from preventable and treatable diseases,” said Dr Margaret Chan, Director-General of WHO.

“But the gains have been uneven. Supporting countries to move towards universal health coverage based on strong primary care is the best thing we can do to make sure no-one is left behind.”