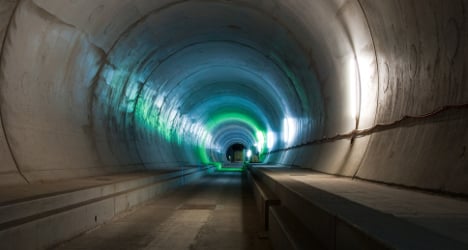 The new rail tunnel is the longest and deepest in the world. Photo: Alp Transit Gotthard

Seventeen years in the making, the Gotthard Base Tunnel is a 57-kilometre railway tunnel through the alps which will bypass part of the historic Gotthard railway line between the cantons of Uri and Ticino.

The tunnel is part of a New Rail Link through the Alps (NRLA) including two other base tunnels – Lötschberg and Ceneri – which has been in the planning for decades. The line’s construction was approved by the public in a referendum in 1992.

When it opens, the Gotthard will supplant the 53-kilometre Seikan tunnel in Japan to become the longest rail tunnel in the entire world.

At 50 kilometres, the Channel Tunnel between France and the UK will be bumped to third. However Austria's delayed Brenner Tunnel could take second place when it opens in about a decade at an estimated length of 55 kilometres, said AFP.

What’s more, with 2,300 metres of rock above it, the Gotthard will also be the world’s deepest rail tunnel, says construction company Alp Transit.

Why is it needed?

The old Gotthard railway line dates from 1882 and is an important trade route through the alps from northern to southern Europe. Every year around 26 million tonnes of freight is transported by trains along the route and that volume is only increasing.

With next to no gradient, the new twin-tube Gotthard tunnel can bear longer, heavier trains than the old line and will increase capacity to 260 freight trains a day, compared with 180 on the existing line.

The new line will also reduce the route between Altdorf and Bellinzona by 30 kilometres, allowing trains to travel more quickly through the alps, says Alp Transit. Passenger trains will depart every half an hour, taking 20 minutes to travel through the tunnel at speeds of up to 250km/hr.

The line will be completed by the opening of the Ceneri base tunnel in 2020, after which time the journey between Zurich and Milan will be shortened by nearly an hour.

How much did it cost?

About 12.2 billion francs ($12.3bn) for the Gotthard Base Tunnel alone, making 23 billion total for the entire project including the Lötschberg (which opened in 2007) and Ceneri tunnels.

In terms of the opening events, the government has gone to town, spending a reported 12 million francs on the festivities. The media budget alone is 28,000 francs, the federal transport department told news agency ATS.

Among the 1,100 guests getting a first glimpse of the tunnel at a glitzy opening event on June 1st will be German Chancellor Angela Merkel, French President Francois Hollande and Italian Prime Minister Matteo Renzi, along with all 246 Swiss MPs and the seven-member Swiss federal government.

A thousand Swiss residents selected in a special prize draw (which 160,000 entered) will be the first to travel through the tunnel, and 300 members of the world’s media will capture the day for posterity.

When can I travel through it?

The tunnel is officially handed from the construction company to Swiss federal railways (SBB) on June 1st, but there will be a six month testing period before passenger services start on December 11th 2016.

However you can be one of the first to travel through it by booking a ticket for a special preview trip on June 4-5th, when there will be public festivities at both ends of the tunnel.

Or you can experience the tunnel without ever leaving your sofa by watching this 360-degree video by broadcaster SRF.

Find out more at gottardo2016.ch