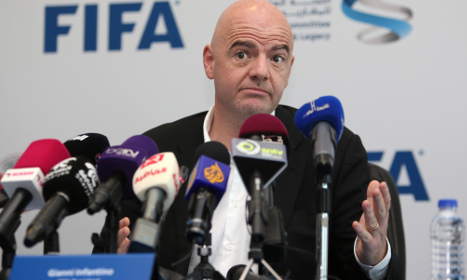 “I never stole anything. Everything I have earned in my life, I have worked for.” Photo: AFP

“My enemies want to make me out to be greedy. That is stupid,” Infantino told the Le Matin Dimanche weekly, referring to reports that he has clinched an annual salary of two million francs ($2 million, €1.8 million).

“I never stole anything. Everything I have earned in my life, I have worked for,” he said.

He said the contract was still being negotiated and that once signed “I will gladly show all the details and you will see that the amount is not as high as the two million francs mentioned in the media.”

Infantino, who took the helm of the scandal-plagued body in February vowing to lead world football into a new era of “transparency” and “honesty” also addressed claims by Germany’s Die Welt newspaper Friday that he had improperly ordered the destruction of the minutes of a Fifa executive committee meeting held at last month’s congress in Mexico City, in which his salary was discussed

The paper alleged Fifa’s independent ethics committee was looking at the issue and could impose a 90-day ban on the new president if the allegation was confirmed, but the ethics committee denied that any investigation was ongoing.

“If there is a destruction operation underway, it is targeted against me,” Infantino said in Sunday’s interview.

He explained that an illegal copy had been made of the “strategic, confidential meeting”, and it was this copy he had asked to be destroyed.

“The original is in good hands and is at the disposal of the competent authorities,” he said.

Infantino also said Fifa investigation findings that former chief Sepp Blatter, his number two Jerome Valcke, and finance director Markus Kattner plotted “to enrich themselves”, and had awarded themselves bonuses and contracts worth $80 million (€71 million euros) in the past five years alone were “surprising to say the least.”

“We have ordered a serious and complete audit,” he said, adding he expected the results to be released “soon”.

He would not comment on whether a search carried out by Swiss authorities at the Fifa headquarters on Thursday was linked to the Fifa investigation findings, beyond stressing that “it was not my office or that of the new Secretary General that was searched, but Kattner’s office.”

Kattner was sacked on May 23 after Fifa started looking into millions of dollars of payments that the finance director, and acting general secretary after Valcke was dismissed last year, awarded himself two million francs ($2 million, €1.8 million) payment to former Fifa vice president Michel Platini.