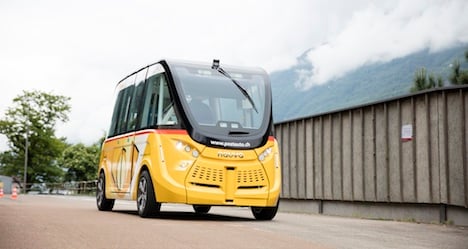 Residents and visitors can now use the self-driving shuttles to make their way around the old town of the canton of Valais capital.

The fully electric vehicles have 11 seats and travel at a speed of 20 kmh.

They are free of charge to use and will initially run every afternoon from Tuesday to Saturday.

The shuttles were presented to the public for the first time last December and have been tested on private land over the past few months.

The Federal Roads Office (FEDRO) and the road traffic department of the canton recently gave the green light to the public testing of the vehicles, which will run until October 2017. In a statement, PostBus said all the companies and institutions involved in the tests attached great importance to the safety of passengers and other road users.

The shuttles are operated using a special fleet management system. If necessary, the remote operator can stop the vehicles immediately.

A safety driver is on board for every journey and is responsible for ensuring the shuttles are in perfect working order.

The safety driver can apply the emergency brakes by pressing one of two emergency buttons in the vehicle.

The driver also provides information and assistance where needed to passengers.

To comply with technical and legal requirements the two vehicles have been modified and now feature air conditioning, permanent ventilation and windscreen wipers.

Greater autonomy is ensured by a second 16.5 kW battery, and thanks to a ramp the shuttles are also usable by people with restricted mobility.

PostBus stressed that the objective was not to replace buses on existing routes with autonomous vehicles. It said it wanted to create an opportunity to connect places that were not previously served by public transport.

Details of the timetable and route can be found here.