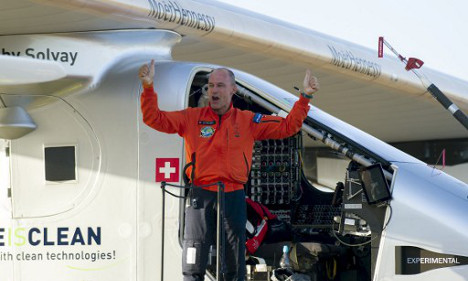 “I can't take it in, it is so fantastic,” Swiss pilot Bertrand Piccard told the plane's mission control centre in Monaco in remarks broadcast live on the Internet.

Applause broke out as the experimental plane set down at Seville airport in southern Spain just before 7:40 am (0540 GMT) where a team was on the ground to welcome Swiss pilot and adventurer Bertrand Piccard, an AFP news agency correspondent said.

“It is so fantastic!” Piccard told the plane's mission control centre in Monaco in remarks broadcast live on the Internet as the plane, which took off from New York on Monday, touched down.

“A dream is coming true,” the team had tweeted as the plane slowly approached its final destination early on Thursday after flying 6,272 kilometres (3,900 miles) across the Atlantic.

Solar Impulse, which has just completed the 15th leg of its around-the-world trip, set out on March 9, 2015 in Abu Dhabi, and has flown across Asia and the Pacific to the United States with the sun as its only source of power.

“Good morning Seville! Do you have a lot of direct flights from NYC?” Piccard tweeted with a wink shortly before landing.

Prince Albert of Monaco, a patron of the project who had spent the entire night at the control centre, congratulated Piccard on the journey: “Bravo, it was magnificent to see!” he said from the tiny state on the French Riviera.

“I arrived in the middle of an air show, it was absolutely extraordinary, that kept me awake!” Piccard told him in response, describing the acrobatic display put on by the Spanish air force as he came in to land.

The voyage marks the first solo transatlantic crossing powered only by sunlight and Piccard has been getting little sleep as he survives on short catnaps.

“After a long night of turbulence and little sleep, I see the first light of the day,” Piccard tweeted earlier on Wednesday, later saying he had spotted a commercial plane flying past him.

Piccard had kept followers up to date with sightings of whales and icebergs, as well as occasional turbulence on the near three-day transatlantic journey.

Describing the crossing as “perfect”, Piccard said he had been guided by a group of engineers and meteorologists who had enabled him to pass through the clouds as if “through the eye of a needle”.

Solar Impulse is being flown on its 35,400-kilometre trip round the world in stages, with Piccard and his Swiss compatriot Andre Borschberg taking turns at the controls of the single-seat plane.

Borschberg piloted a 6,437-kilometre flight between Japan and Hawaii that lasted 118 hours, smashing the previous record for the longest uninterrupted journey in aviation history.

After the Atlantic crossing, Piccard and his colleague have two options: they can either make their way to Abu Dhabi with one more stop, as originally planned, or they could try to fly the rest of the way in one go.

No heavier than a car but with the wingspan of a Boeing 747, Solar Impulse typically travels at a mere 48 kilometres per hour (36 miles per hour), although its flight speed can double when exposed to full sunlight.

Borschberg and Piccard say they want to raise awareness of renewable energy sources and technologies with their project.

“I'm flying over the Atlantic with no fuel to show that solar energy & energy efficiency can achieve incredible goals,” Piccard wrote on Twitter.

“By flying over the Atlantic, I want to encourage society to manage the challenges of our time with pioneering spirit.”

Piccard and Borschberg are no strangers to adventure.

Piccard, a psychiatrist, made the first non-stop balloon flight around the world in 1999. Borschberg narrowly escaped an avalanche 15 years ago and in 2013 survived a helicopter crash with minor injuries.

Spectacular #selfie moment over the #AtlanticOcean. Share it if you think the #futureisclean pic.twitter.com/JwOqeFa7Qe