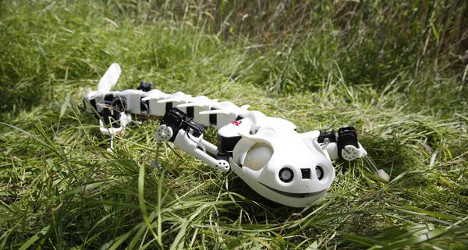 The robot mimics the gait of a salamader in unprecedented detail. Photo: EPFL

Auke Ijspeert and his team at the world-leading EPFL studied x-rays of a salamander species Pleurodeles waltl to build a robot that mimics the gait of the lizard-like amphibian in unprecedented detail, EPFL said in a statement.

Dubbed ‘Pleurobot’, it can walk, crawl and even swim underwater.

“What is new is really our approach to building Pleurobot,” said Ijspeert. “It involves striking a balance between designing a simplified bone structure and replicating the salamander's gait in three dimensions.”

Ijspeert said that animal movement is “an inherently complex process” and that understanding it gives insight into how the spinal cord works and its interaction with the body, including in humans.

Understanding this could help with the development of future therapies and neuroprosthetic devices for paraplegic patients and amputees, believes Ijspeert.

Neurobiologists have shown that electrical stimulation of the spinal cord is what determines whether the salamander walks, crawls or swims.

“Being able to restimulate these circuits in humans in the long term is something very important and for that you need to understand how the spinal cord works,” he said.