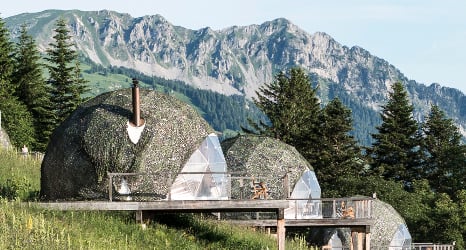 Rochers-de-Naye is a spectacular place at the best of times. But it’s even better when the tourists have left. Miss the last train down to Montreux and stay overnight on the 2,042m mountain in one of its five Mongolian yurts. The big yurts sleep up to eight people, while there’s also a ‘love yurt’ for two.

Perched on a slope in the Valais overlooking Monthey, Whitepod’s 15 ecologically friendly but luxurious pods encourage guests to get back to nature. Each energy efficient pod has a wood-burning stove and uses recycled water and biodegradable products, while food in the restaurant is locally-sourced. The pods are a 20-minute walk from reception, but that’s ok – you’ll be given a map, headlight and walking sticks when you check in.

Get an insight into farm life (and stay somewhere for significantly less than the price of a hotel) by spending the night in a barn on a farm. The Sleep in Straw scheme lists hundreds of farms all over Switzerland. Just bring your sleeping bag, and expect a friendly welcome and a copious breakfast with products direct from the farm.

Sleep in the rock

The Felsenhotel La Claustra is a former army fortress deep in the rock on the Gotthard pass. Now a spectacular setting for a hotel, it contains air conditioned bedrooms, a restaurant and an atmospheric sauna.

Sleep the night in the trees at Les Nids near the watchmaking town of Le Locle in the Swiss Jura. The family-run place provides lofty living for couples and families, though it reserves the right to cancel bookings in case of particularly high winds.

Claiming to be the only hotel on stilts in Europe, the Hotel Palafitte is a collection of individual cabins built over the water on lake Neuchâtel. Every room has a view of the lake from the bathtub.

Stay in a silo

The Bergwerksilo is a restored iron ore silo in the village of Herznach in the canton of Aargau which welcomes guests for an unusual night’s bed and breakfast. As part of your stay you can even have a ride on the train that once transported the iron ore to and from the silo.

Sleep in a barrel

A family-run vineyard has come up with an unusual sideline by converting four giant oak wine barrels into guest rooms. Each of Waldmeier’s Fasshotel’s barrels contains six beds, plus there are extra barrels made into hot tubs.

You have to work for these. The Swiss Alpine Club manages a network of little cabins all over the mountains, but they take considerable effort to get to. Usually staffed during the summer months only, they sit within some of the most stunning scenery in the country (such as the Moiry cabin, pictured), offering members and non-members alike a spectacular view to wake up to. Accommodation is usually in dorms, and most serve hot food in the evenings. Book ahead, as they get busy at peak times.

Camp in a cornfield

Get yourself some natural seclusion by booking a night at La Corbière farm near Estavayer-le-Lac, whose Corn Hotel consists of a collection of blue tents in the middle of a cornfield. Mosquito nets provided.