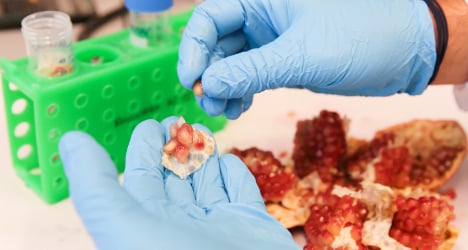 Researchers at EPFL have found a 'miracle molecule' in pomegranate. Photo: EPFL/Alain Herzog

Scientists at the world-leading university wanted to take a closer look at the ‘superfood’ claims for which “scientific proof has been fairly weak,” EPFL said in a statement on Monday.

And they discovered that a substance in pomegranate can be transformed by microbes in the gut into a molecule that enables muscle cells to counter the effects of aging.

In initial tests on rodents, the results of which have been published in journal Nature Medicine, “the effect is nothing short of amazing,” said the statement.

As people age, our cells struggle to recycle their mitochondria, powerful inner compartments within the cells that carry out vital functions.

The degradation of mitochondria affects the health of tissues, including muscles, which gradually weaken over the years and can play a role in age-related diseases such as Parkinson’s.

Scientists on the EPFL study found that a molecule called urolithin A managed to boost the cells’ ability to recycle their mitochondria.

“It’s the only known molecule that can relaunch the mitochondrial clean-up process, otherwise known as mitophagy,” said Patrick Aebischer, co-author of the study.

“It’s a completely natural substance and its effect is powerful and measurable.”

But there’s a catch.

Pomegranate only contains the precursor to this miracle molecule, which is converted into urolithin A by the microbes in the gut.

The amount of urolithin A produced can therefore vary widely, depending on the flora present in the intestine.

“Some individuals don’t produce any at all. If you’re one of the unlucky ones, it’s possible that pomegranate juice won’t do you any good”.

Scientists are therefore working on a method to deliver urolithin A to people who don’t have the right microbes to make it themselves, and the first clinical trials on humans are already underway.