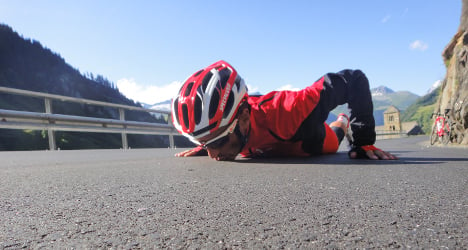 Road cycling in Switzerland will be showcased globally from July 18th to 20th as the world’s most famous cycle race, the Tour de France, enjoys a three-day Swiss detour on a route from the Jura through Bern to the mighty Emosson dam.

As last year’s winner Chris Froome and his fellow competitors will discover, Switzerland offers a huge amount to road cyclists, both novices looking for a fun day out and advanced cyclists wanting to conquer the country’s challenging alpine passes.

Alain Rumpf manages cycle tour company the Grand Tours Project, based in the Vaud Alps, and used to work for the International Cycling Federation.

“Thanks to that [job] I travelled the world and got to ride in the most beautiful places but I have to say I am always amazed by the beauty of Switzerland and the quality of the riding and that always brings me back,” he tells The Local.

Cycle routes here may not be as well known as Italian and French routes made famous by the Tour de France and Giro d’Italia, but they are “as good if not better”, says Rumpf, thanks to their superior roads.

“It’s not just a cliché, the roads in Switzerland are extremely well surfaced and they are better than in other countries. Also the fact that generally there is less traffic.”

“One thing I’ve noticed is that the vast majority of these farm roads have been paved. They are very, very quiet, they take you through fields, through villages. It’s not just about the pedalling, it’s about the culture too and I really like going by these old farms and little villages.”

Cyclists in Switzerland are supported by the comprehensive website veloland.ch, which maps the country’s vast network of set cycle routes with a typically Swiss level of detail that you also notice once on the road.

“We have an excellent infrastructure, a network of perfectly signposted (and documented) national, regional and local cycle routes,” Ruedi Jaisli of Zurich-based company Swiss Trails tells The Local. “So there is a route for any demand, including for those who prefer to just look at the mountains but not have to cross them!”

In addition, the network’s collaboration with the Swiss transport network means cyclists can take their bikes on buses and trains, particularly useful if you want to cut out your route’s more demanding sections.

“The combination with trains, boats and buses is excellent, if you are a bit intimidated by some of the climbs,” says Ronkin.

Inspired? Get on your bike and tackle one of these six amazing cycle rides:

If you’re a novice cyclist, head for a lake, agree Rumpf and Ronkin, as the roads are likely to be flatter. The Three Lakes region, around the lakes of Neuchâtel, Morat and Biel-Bienne, is perfect. “It’s the alternation of small towns, charming little villages, fields, forests and quiet roads that makes casual riding so enjoyable,” says Ronkin. Plus you cross the Röstigraben half a dozen times, he adds. So make sure you figure out whether you should be saying ‘bonjour’ or ‘Grüezi’ as you ride by.

Riders wanting to see classic alpine Switzerland but without the climbs can always cheat on this multi-day trip, says Jaisli. Leading from Lake Geneva to Lake Constance it shows off Switzerland’s picture-postcard scenery with blue lakes, snowcovered peaks and famous towns such as Gruyères and Gstaad. It also has some rather nasty hills including the Saanenmöser Pass and the Brünig Pass. “But both these plus a few other uphills can easily be done by using the local transportation,” says Jaisli. An uphill is always followed by a downhill, and doing the uphill by train or bus just leaves the spectacular downhill by bike.”

Finhaut to the Emosson dam

The Tour de France cyclists will see some spectacular views when they cycle this road on July 20th. “The climb to Emosson is very good actually, because it’s a dead end so it’s a small road, there’s not a lot of traffic,” says Rumpf. “The landscapes as you climb from Finhaut are absolutely amazing because you can see the Mont Blanc from the top. It’s going to be something really special to see the Tour de France on these slopes, and for an amateur it’s a wonderful place to ride as well.”

“Within the classic climbs in Switzerland I think that the Tremola, the south side of the Gotthard, is a must,” says Rumpf. “Because it’s one of the bigger passes, the top is at about 2,100m, and it has some amazing  switchbacks.” It also has a cobbled section, offering a special challenge for advanced riders. “Cobbles are something iconic in cycling,” he says.

A “hidden gem,” according to Rumpf, this alpine pass starts in Sion in the Valais and climbs 1,700m through vineyards, pastures and into the high mountains at the foot of the Diablerets glacier. “There’s such a diversity of landscapes. When you get to the top you can descend a few kilometres on the other side, you get to a beautiful lake, and then the road stops.” From there, you can put your bike on a cable car and descend to Gsteig. “It’s something absolutely unique. With your bike you can do something that a car can’t do. You end up in Gsteig and you can keep riding,” says Rumpf.

One of Jaisli’s must-do routes, this one “leads along the chains of the Jura mountains from Basel to Geneva, has many ups and downs and presents a landscape which is unique,” he says. It’s “a very extraordinary, special landscape and culture” that’s vastly different to the classic alpine scenery elsewhere in the country, he adds.