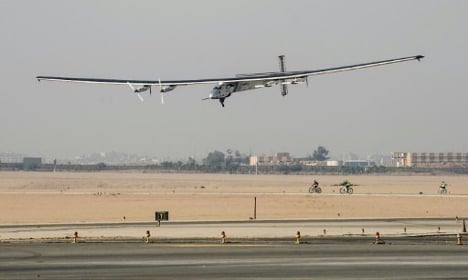 The Solar Impulse 2 had been scheduled to leave Cairo for Abu Dhabi.

“I'm sick. Stomach upset. I prefer to postpone the take-off @solarimpulse. I cannot go flying for 48 hours in that shape. Sorry,” Bertrand Piccard wrote on Twitter.

The aircraft had arrived in Cairo on Wednesday after a two-day flight from Spain, finishing the 3,745km journey with an average speed of 76.7 kmh.

It had earlier landed in Seville after completing the first solo transatlantic flight powered only by sunlight, flying through the night with energy stored in its 17,000 photovoltaic cells.

Piccard had completed the 6,765 transatlantic flight in 71 hours.

The plane is being flown on its 35,400km trip in stages, with Piccard and his Swiss compatriot Andre Borschberg alternating at the controls of the single-seat plane.

“So Piccard was not feeling well yesterday. Was much better this morning. And then again tonight things got a bit worse. So we took the decision… it's not an easy decision but it's a wise decision for safety reasons,” Borschberg told journalists who had assembled to watch the plane take off in Cairo.

The plane should depart during “the next weather window,” he said. “Sometime in the middle of the week.”

Borschberg had piloted the plane in its 8,924km flight from Japan to Hawaii in 118 hours, breaking the previous record for the longest uninterrupted journey in aviation history.

The Solar Impulse 2 embarked on its journey in Abu Dhabi in March 2015.

Both pilots have described flying the plane as a delight, but they have to be in good condition for the long flights.

Piccard had said that the pilots take 20 minute naps as the plane, which is no heavier than a large car but with the wingspan of a Boeing 747, inches across the sky.

“It is comfortable. But of course you need to train for that. You need to train to make some exercise in the capsule, in the cockpit, because otherwise after several days you cannot move your legs and your arms anymore,” Piccard had said when the plane landed in Cairo.

Borschberg and Piccard have said they want to raise awareness of renewable energy sources and technologies with their project.

But they do not expect commercial solar-powered planes any time soon.