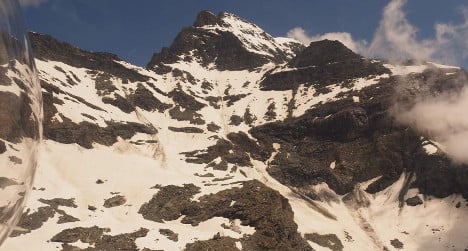 The site of the accident. Photo: Valais cantonal police

The accident happened at about 8am on the Plateau du Couloir in the Bourg-St-Pierre region of Switzerland, near the Italian border, Valais cantonal police said in a statement.

The 52-year-old man and his two French companions left the Valsorey cabin early on Wednesday morning heading towards the Chanrion hut, part of the famous Haute-Route, a hiking or ski touring itinerary from Chamonix in France to Zermatt in Switzerland.

As they descended, at an altitude of 3,500m, one of the three dropped a pole.

It was on going to collect it that the victim fell 200m and was killed instantly.

According to news agencies, the victim’s companions were his father and his son.

A helicopter from air rescue service Air Glaciers attended the scene along with two guides and a doctor.