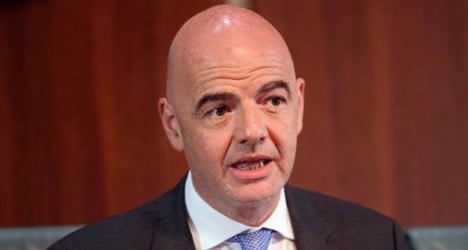 Gianni Infantino was cleared by Fifa's ethics committee. Photo: Philip Ojisua/AFP
“After conducting both preliminary and formal investigation proceedings, the investigatory chamber of the independent Ethics Committee has decided to conclude its investigations concerning Fifa President Gianni Infantino. It was found that no violation of the Fifa Code of Ethics had been committed,” a statement said.
Infantino was “pleased” with the finding, a Fifa statement said, which also thanked “all those who cooperated with the Ethics Committee to ensure that the facts were heard and the truth prevailed”.
The statement from Fifa investigators marked the first confirmation that a probe had been opened targeting Infantino, who replaced Sepp Blatter in
February vowing to crack down on widespread corruption in Fifa.
The ethics committee, which serves as Fifa's in house court, said it found “prima facie” evidence of wrongdoing, but that the formal inquiry proved Infantino's innocence.
Questions surrounding Infantino's conduct emerged within months of him taking charge as the most powerful man in world football.
An Fifa internal memo, which leaked last month but was dated May 23rd, listed concerns about Infantino's lifestyle, as well as possible conflicts of interest, such as the use of private jets, which it said were paid for by Russia and Qatar and estimated at between $115,000 and $150,000 (134,000 euros).
The memo further noted that Fifa has made two company cars and a driver available to Infantino. The second car which is used primarily by Infantino's family cost $20,140 in March and $13,800 in April.
Fifa insiders have also voiced concern about Infantino's refusal to sign his employment contract amid disputes about compensation.
There has been further unease about the process that led to the hiring of Fifa's new general secretary, Fatma Samoura of Senegal, with some suggesting that proper vetting procedures were not followed.
Lead investigator Vanessa Allard cleared Infantino on any misconduct in connection with the flights and expenses.
She also said that any concerns regarding his contract or hiring methods “constituted internal compliance issues rather than an ethical matter.”