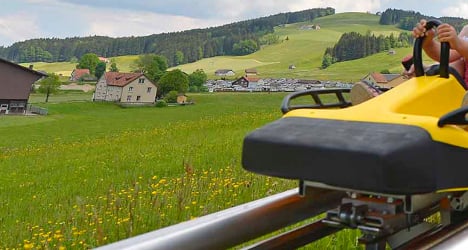 The luge at Jakobsbad-Kronberg. Photo: Luftseilbahn Jakobsbad-Kronberg AG Archive
The man was thrown from the fixed rail bobsled run “for unexplained reasons”, police in the canton of Appenzell-Inner-Rhodes said in a statement.
He suffered serious injuries and died at the scene.
The summer toboggan run, a popular family activity in the area, was initially closed as investigations were carried out, but reopened on Sunday after the authorities found no technical issues were to blame for the accident.
Police said the man lived in Zurich and had travelled to Jakobsbad on his own.
Speaking to 20 Minutes, Roland Streule, the director of the luge, said “The bob was in perfect order.”
The luge cannot travel faster than 45km/hour, he said, and there is a security check at the start to make sure every passenger is wearing a seatbelt.
“The victim was strapped into the bob at the beginning of the run and the luge did not come off the rails,” he said.
The investigation is ongoing.