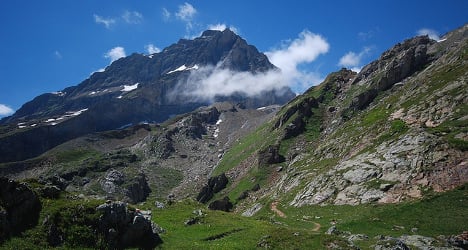 The 55 and 68 year old, both Swiss, had left the Lötschenpass cabin at around 4am on Saturday in the direction of the Balmhorn and then the village of Kandersteg, Valais police said.

The alarm was raised when they failed to arrive at their destination on Sunday.

A helicopter search was initiated, but it wasn’t until Monday morning that the bodies of the two hikers were found on the north face of the Balmhorn.

According to initial investigations, the pair were roped together and hiking at around 3,000m elevation when they fell 400m for “unknown reasons”, police said.

Also in the Valais, a 59-year-old shepherd died on Monday after going out to look for his sheep.

The man, his wife and two other people set out to look for two sheep lost on the Grimselpass, Valais police said.

After a time, the man became separated from the others in a region known as the Nägelisgrätli.

When he didn’t return, the others went to look for him and found him lying dead downhill from a walking trail.