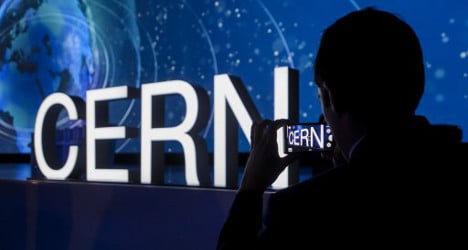 The bizarre video which has circulated online for days shows several individuals in black cloaks gathering in a main square at Europe's top physics lab, in what appears to be a re-enactment of an occult ceremony.

The video includes the staged 'stabbing' of a woman.

It was picked up by conspiracy theorists online who have long claimed that occult rituals take place at Cern.

In posting the film on its site, US website Stranger Than Fiction made a link to the opening of the Gotthard tunnel in June, whose ceremony involving actors dressed as naked angels and mountain goats was considered somewhat bizarre by many commentators around the world.

“It isn't a coincidence that just a few months back they had this huge occult ceremony when they dedicated this tunnel just a few miles away,” said the voiceover.

“These scenes were filmed on our premises, but without official permission or knowledge,” a Cern spokeswoman told AFP in an email.

“Cern does not condone this type of spoof, which can give rise to misunderstandings about the scientific nature of our work,” she added.

The “investigation” under way was an “internal matter”, she said.

The video has raised questions about security on Cern's campus.

Asked to detail the security procedures surrounding access to the campus, the Cern spokeswoman said: “Cern IDs are checked systematically at each entry to the Cern site whether it is night or day.”

She further indicated that those responsible for the prank had access badges.

“Cern welcomes every year thousands of scientific users from all over the world and sometimes some of them let their humour go too far. This is what happened on this occasion,” the email said.

The spokeswoman was not available to comment the possible identity of those responsible.

Geneva police told AFP they had been in contact with Cern about the video but were not involved in an official investigation.

Cern hosts machinery carrying out some of the world's most elaborate particle research, including an enormously powerful proton smasher trying to find previously undiscovered particles.