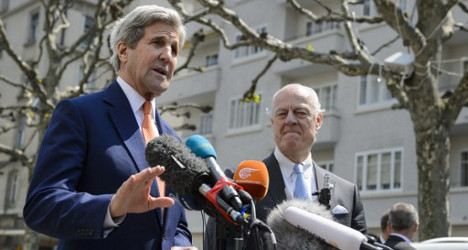 Kerry, who was flying in from Jeddah in Saudi Arabia where he announced a new peace push for conflict-torn Yemen, arrived in the Swiss city shortly before 10pm (2000 GMT).

He was scheduled to meet with Lavrov Friday morning for talks expected to focus heavily on the situation in Syria.

Earlier Thursday, the UN special envoy for Syria Staffan de Mistura described the meeting as “important” and said it could help his push to resume peace negotiations for the country.

De Mistura did not say whether he would be meeting with the two top diplomats while they were in town.

Successive rounds of international negotiations have failed to end the Syria conflict, which has killed more than 290,000 people and forced millions to flee their homes.

Moscow and Washington support opposite sides in the conflict, which erupted in 2011 after President Bashar al-Assad's regime unleashed a brutal crackdown against a pro-democracy revolt.

Russian planes have also been carrying out raids on Syrian rebel groups, some of which are supported by the United States.

But the two countries have a common foe in the Islamic State group, and have been in contact on efforts to establish military cooperation against the jihadists.

Perhaps as a sign of tightening cooperation, Moscow vowed on Thursday to work with the United States on a response after a UN investigation found that the Syrian regime had carried out chemical attacks.

“We have a joint interest in… preventing such things from happening, even in the fog of war,” Moscow's UN Ambassador Vitaly Churkin told reporters.

The two countries also co-chair a UN-backed humanitarian taskforce for Syria, which has been struggling to ensure access for desperately-needed aid across the country.

Aleppo, Syria's second city and former economic hub, has emerged as a top concern since regime troops seized control of the last supply route into rebel-held areas in mid-July.

Russia last week gave its blessing to a long-demanded 48-hour pause in fighting in the city to allow in aid, but de Mistura said on  Thursday other unspecified parties were still dragging their feet.