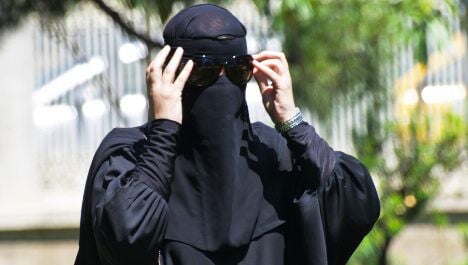 The canton of Ticino already has a ban on the veil, in place since July 1st. And in March this year the so-called Egerkingen committee launched a campaign to push for a national referendum to extend the ban across the country.

The survey, published by Le Matin Dimanche on Sunday, asked 15,824 people across Switzerland their thoughts on the subject.

Some 55 percent of respondents fully approved of the initiative, and a further 16 percent were on the whole in favour.

Support for a ban was at a similar level among both men (73 percent) and women (69 percent) and did not vary much across the country, with 72 percent of Swiss Germans and 70 percent of those in French-speaking areas approving the idea.

However there are clear political divisions.

Some 96 percent of those who vote for the right-wing Swiss People’s Party (SVP) approved of a burqa ban, along with 73 percent of Liberal-Radical voters and 75 percent of Christian-Democrats.

However only 33 percent of Green Party voters are in favour of a ban, and Socialist Party voters remain split on the issue, with 47 percent supporting a ban and 49 percent against it.

Speaking earlier this month, Socialist Party president Christian Levrat told La Liberté that burqas were “mobile prisons” for women and should be eliminated, but that should be done through “education and support” not through a popular initiative.

The Egerkingen committee has until September 2017 to collect the 100,000 signatures required to take the issue to a national referendum.

Launched in March by a team including SVP MP Walter Wobmann, the initiative is modelled on the Ticino ban and proposes a ban on any face covering in public places.

“Switzerland is, by tradition, a country of liberty. Human beings, free men and women, look at each other’s uncovered faces when speaking,” the committee said in a statement to launch the initiative.

Quoting a judgement from the European Court of Human Rights, the committee said covering the face in public “is a contradiction with liberal cohabitation in a free society”.

Banning such a practice is not discrimination, it said.

The proposed ban would apply not only to the burqa but also to face coverings used by people intending to commit a crime, such as vandals and those involved in violent demonstrations.

Exceptions should be made where health and safety is concerned, in bad weather or for local customs, such as masks at festivals, says the committee.

The issue of the burqa has dominated Swiss news of late, with debate sparked by the situation in neighbouring France, where several beaches have banned the burqini, the swimming version of the burqa.