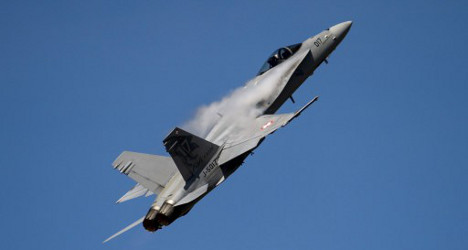 The Swiss jet was an F/A-18 Hornet. Photo: Fabrice Coffrini/AFP

“On Tuesday afternoon, the crash site was located,” the ministry said in a statement, adding that the plane had been spotted from the air in a hard-to-reach area of the Susten Pass, at over 3,000 metres altitutde.

Difficult weather conditions had so far made it impossible to reach the wrecked plane by foot, it said, adding that mountaineering experts would be lowered down by helicopter “as soon as conditions allow.”

A large-scale search for the pilot was still continuing, the ministry said, involving air search by air rescue service Rega, police from Zurich and Bern and military police.

“The family of the pilot will be taken to the crash site as soon as possible so they can see for themselves the place where the accident happened,” it said.

The F/A-18 C single-seater had just taken off from the Meiringen airbase in the central canton of Bern Monday afternoon when radio contact with the pilot was suddenly cut.

The accident is the latest in a string of crashes to befall the Swiss airforce.

In June, two Swiss Tiger F-5E fighter jets collided during a training flight for an air show in the Netherlands in June.

One of the aircraft crashed and burst into flames, but the pilot ejected to safety.

And during another training exercise in October last year, an F/A-18 crashed in an uninhabited part of France's eastern Doubs region.

No one was hurt on the ground and the pilot was only slightly injured after ejecting from the plane.