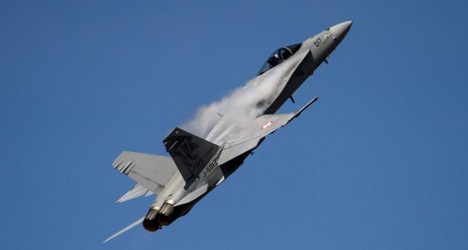 The advanced fighter jet disappeared over the Susten Pass in central Switzerland on August 29th. Its wreckage was found the following day in the remote Hinter-Tierberg region at an altitude of around 3,300 metres (11,000 feet).

The body of its 27-year-old pilot was discovered in the wreckage a day later.

A statement released by the Swiss federal defence department on Tuesday said that military flight controllers at the Meiringen base gave the pilot “altitude data that was lower than the minimal safety level for the specified area”.

The investigation will now study the effect of that action on the accident but without “for the moment, focusing on any particular person”, said the statement.

Skyguide, which controls airspace on behalf of the military, has opened an internal investigation, reported Swiss media including Le Matin.

At a press conference on Tuesday Skyguide's spokesman said: “The action of a flight controller has apparently contributed to the accident and we are incredibly sorry.”

The controller involved is experienced, he said.

The pilot, a career officer in the Swiss armed forces, had taken off shortly after another F/A-18 single-seater for a joint exercise with an F-5 fighter. Due to bad weather, they were using their instruments and radar to track each other but were not in visual contact.

A few minutes after taking off the second plane lost radar contact with the leader for unknown reasons, said the defence ministy.

It was then, in accordance with the rules, that the pilot asked flight control what altitude he should fly at.

The crash happened amid thick cloud, the statement said, adding that the ejector seat “appears not to have been activated.”

The plane's black box has not yet been found.

The investigation is continuing and a final conclusion is not expected before the end of the year.