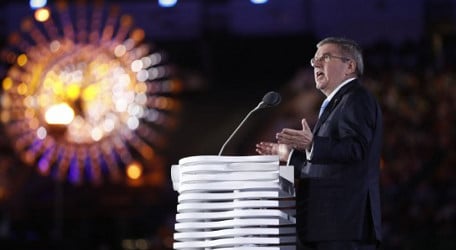 It's the first time since 1984 that a president of the IOC — based in Lausanne — has failed to be at an opening ceremony and there are suggestions that the no-show has to do with divisions over the Paralympic committee's outright ban on Russian athletes.

Local media also said that Brazilian authorities wanted to hear from Bach on the case of top Irish Olympic official Patrick Hickey, who was arrested at dawn on August 17th at a luxury Rio hotel over an alleged ticket scam.

Bach had instead been scheduled to attend a mourning ceremony for the late West German president Walter Scheel that meant he could not attend the opening gala in Rio “as originally planned”, the IOC said in remarks to AFP.

“At this present time there are no plans for the president to travel to Brazil,” it added.

And addressing the reports in Globo and other local media that Brazilian authorities want to talk to Bach about Hickey, the IOC said: “The IOC cannot comment on a newspaper story nor on the ongoing legal procedure against Mr Hickey for whom the presumption of innocence prevails.

“For the IOC it goes without saying that it will cooperate on this matter.”