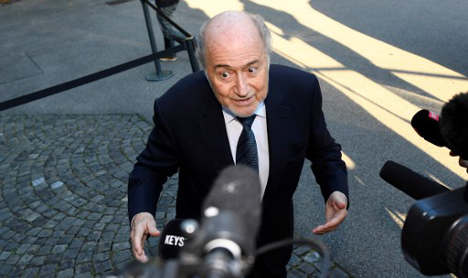 Football's ruling body claimed in June that Blatter, Jerome Valcke and Markus Kattner had skimmed off the eight-figure sum in salaries and bonuses in “a coordinated effort” to “enrich themselves” between 2011-2015.

It says it has passed on its finding to the Swiss police.

In a statement, the investigatory chamber of FIFA's ethics committee announced it had opened “formal proceedings” against the three men who it suspects of “conflict of interest and corruption”.

Blatter is serving a six-year ban from football over ethics violations relating to a suspect $2 million he authorised in 2011 to former UEFA boss Michel Platini.

Valcke was himself banned for 12 years, reduced to ten on appeal, over misconduct regarding television deals and 2014 World Cup ticket sales.

Kattner, who briefly succeeded Valacke as Blatter's righthand man, was fired in May over 'breaches' involving millions of dollars.