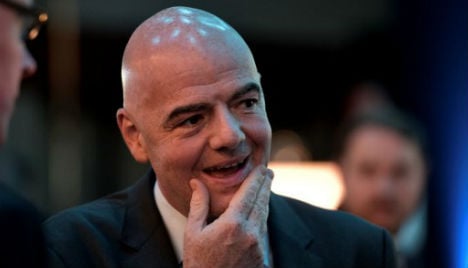 Gianni Infantino said the new autitor was an "important step". Photo: Aris Messinis/AFP
“The Bureau of the FIFA Council has appointed PwC Switzerland as the new statutory auditors of FIFA,” it said in a statement.
FIFA President Gianni Infantino welcomed the decision “as a further important step in the reform process underway at FIFA,” the statement said.
It described the move as “an example of how the organisation is restoring its financial control and management mechanisms to the fullest.”
The announcement came after the Swiss branch of KPMG terminated its auditing relationship with FIFA three months ago, after overseeing the auditing of its accounts since 1999, amid a cascade of scandals at the organisation.
FIFA have been battling to redeem their name ever since a raid on a Zurich hotel last year to arrest seven FIFA officials at the centre of a US investigation.
US prosecutors have started to judge those indicted, while the Swiss justice system is investigating the awarding of the 2018 World Cup to Russia and the 2022 edition to Qatar.
And FIFA's ethics committee said earlier this month that disgraced former FIFA president Sepp Blatter, who has already been banned from football for six years, and his chief lieutenants were under fresh investigation over alleged illicit salaries and bonuses totalling $80 million (71mn euros)
FIFA stressed Saturday that the appointment of PwC was “the result of a thorough, transparent and open selection process conducted by FIFA with several different auditing companies.”
The appointment will initially be valid until the next FIFA Congress in May next year, the statement said.
“This Congress will decide on the appointment of FIFA's statutory auditors for a full three-year period, as provided for by the FIFA Statutes,” it said.