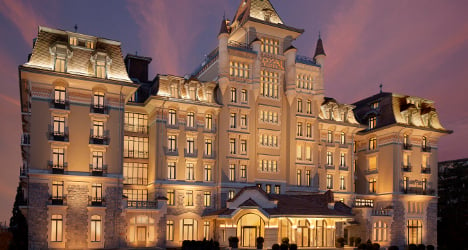 The original Art Nouveau hotel opened in 1909 after three years of construction, and quickly became a landmark hotel for the city. In its heyday it was a stopover hotel for passengers on the Orient-Express and was beloved by the aristocracy – the Spanish royal family even lived there in exile.

After a period of decline, it was bought by Qatar-based Karata Hospitality in 2009 and then closed for a five-year renovation project.

The works, which cost 100 million francs, included the complete refurbishment of the building and the creation of an entirely new wing.

Though it opened its doors last November, the building work continued this year with the addition of a spa and panoramic Sky Lounge bar on the top floor.

The Savoy’s five-star rating makes it the third hotel in Lausanne to achieve the top status, after the Beau-Rivage Palace and the Lausanne Palace.

So, with prices starting at 350 francs for a 'deluxe' room (the standard category) and 570 francs for a junior suite, exactly how much bang do you get for your buck? The new Lobby Lounge seats 60 for cocktails under a huge coloured-glass chandelier. Or you can opt for a suite. This one, the Royal Savoy Suite, is 120m2 and includes a dining room to seat ten people. But that's got nothing on the 6th floor Katara Suite, which has three bedrooms, its own gym, spa and jacuzzi and a 370m2 terrace. To get to the restaurant guests walk through a so-called ‘sensory corridor’ which has glass cabinets on both sides displaying wines, cheeses and deli meats. Guests at the Brasserie du Royal dine on dishes designed by its 'signature chef' (meaning he doesn't actually do the day-to-day cooking), three Michelin star French chef Marc Haeberlin. The executive chef (meaning he does) is 34-year-old Julien Krauss, who trained under Haeberlin at his famous Alsace restaurant L’Auberge de l’ill. Dishes include goose foie gras and lobster mousse. Work off your dinner (or just chill out) at the 1,500m2 spa comprising indoor and outdoor swimming pools, a sauna, hammam, treatment rooms, a hair salon and gym.

PARTNER CONTENT
Making Waves: Female entrepreneurs having an impact in 2022

PARTNER CONTENT
‘It really feels like a dream come true’: working in a Paris palace hotel
Url copied to clipboard!