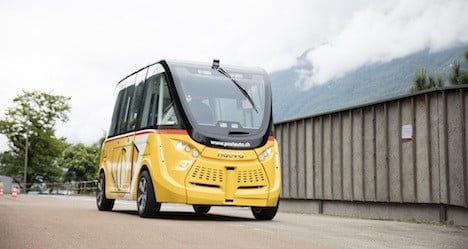 The autonomous shuttle bus was carrying three passengers through the Valais city when it hit the open rear door of a parked delivery van, PostBus said in a statement.

Both vehicles sustained light damage but no one was injured.

“The project managers and the vehicle manufacturers are currently intensively analyzing the reasons for this accident,” said the statement.

“PostBus decided to momentarily halt the trial of its driverless buses until the reasons for this incident are known and necessary measures can be taken.”

Sion is the first city in the country to pilot self-driving public buses.

The two autonomous shuttles were unveiled last December, before public testing on the streets of the city’s Old Town began in June in a trial that was due to last until October 2017.

The fully electric vehicles are installed with fleet management technology developed by Lausanne-based start-up BestMile which allows them to navigate the streets. They are monitored remotely and if necessary, a remote operator can stop the vehicles immediately.

Each bus can take up to 11 passengers and travels at a speed of 20km/hr. Though self-driving, each has an attendant on board who can operate an emergency brake.

Speaking to news agencies following Wednesday’s accident, PostBus spokesperson Valerie Gerl said they were analyzing the vehicle’s “black box” but that at the moment it was impossible to say if the collision could have been avoided if the bus had had a driver.

BestMile spokesperson Maud Simon told The Local: “We're not concerned about the impact of the incident on our technology as it was in no way involved in the incident.”