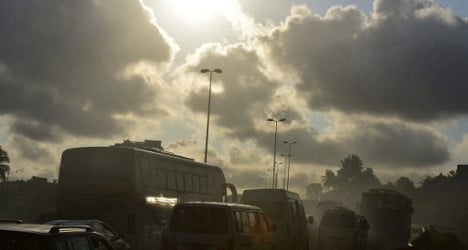 New data in a report from the UN's Geneva-based global health body “is enough to make all of us extremely concerned,” Maria Neira, the head of the WHO's department of public health and environment, told reporters.

The problem is most acute in cities, but air in rural areas is worse than many think, WHO experts said.

Poorer countries have much dirtier air than the developed world, according to the report, but pollution “affects practically all countries in the world and all parts of society”, Neira said in a statement.

“It is a public health emergency,” she said.

Tuesday's report was based on data collected from more than 3,000 sites across the globe.

It found that “92 percent of the world's population lives in places where air quality levels exceed WHO limits”.

The data focuses on dangerous particulate matter with a diameter of less than 2.5 micrometres, or PM2.5.

PM2.5 includes toxins like sulfate and black carbon, which can penetrate deep into the lungs or cardiovascular system.

Air with more than 10 microgrammes per cubic metre of PM2.5 on an annual average basis is considered substandard.

In some regions satellite data has been complemented by ground-level PM2.5 measurements, but in much of the developing world ground readings remain unavailable, forcing the WHO to rely on cruder estimates.

Despite these data gaps, Neira said the UN agency now had more information than ever about pollutants in the planet's air.

Using both satellite and ground measurements “is a big step forward towards even more confident estimates of the huge global burden”, of dirty air, she added.

Even in mountainous Switzerland, with its reputation for clean, green living, some 1,500 people die every year from illnesses linked to outdoor air pollution, said the report. That's 18 out of 100,000 people.

However Switzerland has the 17th lowest number of deaths related to air pollution, according to WHO figures.