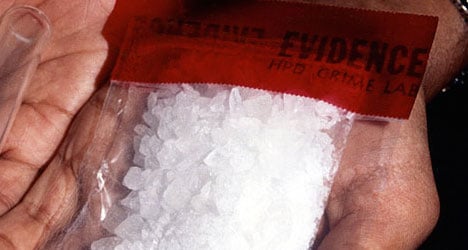 Media reports quoting cantonal police said use of the drug had shot up last year.

“In 1998 there were around 20 methamphetamine addicts in Neuchâtel. Today the figure is over 1,200 and the number is rising by around 100 a year.”

Crystal methamphetamine, also known as crystal meth, ice or speed, is a highly addictive white crystalline stimulant that can be smoked, snorted, injected or taken orally and that is associated with serious health conditions.

The reports said a study conducted by the University of Lausanne last year that tested wastewater from a number of Swiss cities found Neuchâtel had the highest level of consumption of crystal meth.

Researchers measured 33.4 milligrams per day per 1,000 people in the western Swiss city.

In Zurich, which came in second place, the measurement was 21.8 mg.

Neuchâtel is not known as a drugs hot spot of Switzerland. Experts believe crystal meth may have been spread through the availability of drugs from Thailand at Thai massage salons opened in the region in the 1990s.

The crystal meth market in Switzerland is reported to be still very small compared to consumption of cannabis, cocaine and heroin.

Switzerland- wide there has only been a small rise in the availability and consumption of the cheap drug, the reports said, quoting an expert report.