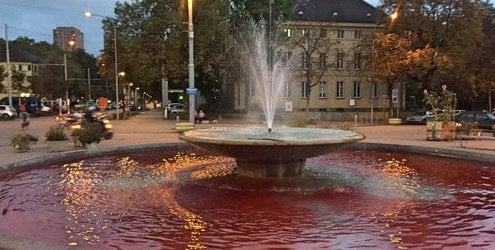 Food colouring and not blood was used in the action. Photo: activistin.ch

The protest met with dismay from the city authorities that had to return the water to its natural colour, 20 Minuten reported.

Members of the feminist collective aktivistin.ch poured food dye into fountains, including those at the Stadelhofen railway station and at Helvetiaplatz, between 6.30 and 7.30am.

Spokeswoman Carmen Schoder said the #happytobleed action was meant to prompt discussion on attitudes towards the female body.

“Many people still see menstruation as something shameful,” she said, adding that people were afraid to talk about it.

The organization is angry at the fact that tampons and sanitary towels are taxed at a rate of eight percent, and not at the rate of 2.5 percent which applies to most items of daily use.

“Tampons are seen as a luxury product and women are financially disadvantaged,” Schoder said. The tax gave the impression that sanitary products were not a requirement.

The Zurich authorities, which had to clean the fountains, complained that the water was meant for public consumption and should not be misused for publicity purposes.

A number of countries, including Britain and Ireland, have abandoned their tax on women's hygiene articles following protests. Canada has also done away with its tax and a number of US states are considering scrapping their tax.