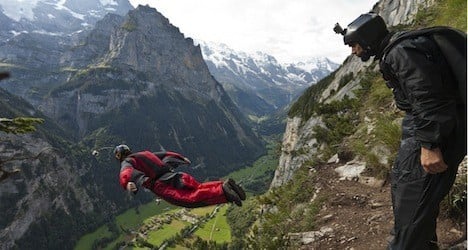 With its sheer cliffs, in recent years the Swiss valley of Lauterbrunnen has become internationally-renowned for the daredevil sport, which involves basejumping from mountains wearing a so-called wingsuit which allows the wearer to ‘fly’ through the air until finally opening a parachute.

Regarded as one of the world’s most dangerous sports, it regularly claims lives in Lauterbrunnen, including four this year.

In August a Briton and an Italian plunged to their deaths in the resort, one of whom was filming a video for action camera manufacturer GoPro.

And earlier that month an American had to be rescued in a complicated 13-hour overnight operation after crashing into cliffs and breaking his legs.

But authorities in Lauterbrunnen see no need to ban the sport at present.

Speaking to Le Matin on Wednesday, the commune’s president Martin Stäger said there was no legal basis to ban the sport, and even if there was, they don’t want to impose a ban.

“We don’t want to do it, or we’d also have to ban climbing and hiking,” he said. “Each person has to decide for himself if he wants to do this sport and should know his own limits.”

Chamonix’s mayor, Eric Fournier, said he announced the ban out of fear for the safety of people in the town, after a Russian wingsuit flyer crashed into a chalet.

But Michi Schwery, president of the Swiss Base Association (SBA), told the paper there have never been any “collateral” victims in Lauterbrunnen. One particular area of the commune where there are too many tourists is already off limits to basejumpers, he added.

“The most important thing is to understand that you take the risk yourself and only for yourself.”

Get an idea of what it's like to go wingsuit flying in Lauterbrunnen, watch this video.