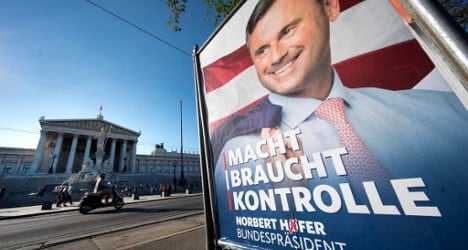 The debate, scheduled for Thursday evening on the IHEID campus, is entitled ‘Can Europe’s politicians solve the migration crisis?’ and is organized in association with The Europaeum, an association of ten European universities.

As well as Hofer, the panel will include former president of the EU Commission José Manuel Barroso, the former foreign minister of the Czech Republic, Karel, Prince of Schwarzenburg, and Carol Batchelor, representative of the UN Refugee Agency (UNHCR).

Hofer is the presidential candidate for the far-right Freedom Party (FPÖ), which is known for its anti-immigration stance.

He was narrowly defeated in Austria’s presidential election in May. But the result was annulled over claims of electoral fraud and irregularities in the vote, and Hofer is standing again in the re-run, due to take place on December 4th.

If he wins, he will be Europe’s first far-right head of state since 1945.

In an open letter to the IHEID, 110 students, alumni and professors pointed out that Hofer is associated with “numerous far-right groups and their causes, including Islamophobia, anti-Semitism and homophobia”.

Inviting him to speak at the institute “gives credence to his opinions and will serve to mainstream and normalize xenophobic and racist views,” it said.

Hofer’s presence at the IHEID would be “at odds with the very values of our institution,” said the students, calling for it to “set an example and not act as a platform for those responsible for promulgating opinions that have very real negative impacts on the lives of minorities in the European continent”.

The objectors also expressed their concern that, at the time of writing the letter, no-one with expertise on migration was due to sit on the panel. However the UNHCR’s Batchelor confirmed her presence on Monday.

Speaking to the Tribune de Genève, Philippe Burrin, director of the IHEID, agreed that “what Mr Hofer represents is in contradiction with the values of the institute”.

However he recognized the growth of populist parties in Europe and said the debate was a chance to discuss the questions that arise from their immigration policy.

“To cancel this round table reinforces the idea of a plot led by the establishment. It’s better to listen to Norbert Hofer and contradict him,” he said.