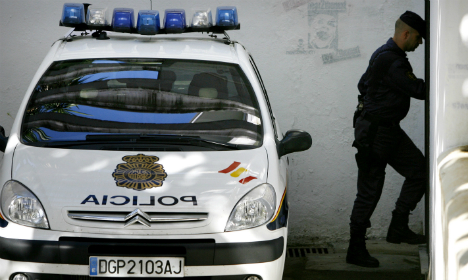 Spanish police went to the apartment after the daughter had managed to send an email to the ANAR Foundation, which helps children in trouble. Photo: Jose Luis Roca / AFP file picture

The children, now 17 and 15, had never gone to school during their time in the southeastern province of Alicante and had hardly been allowed assistance when ill, the Guardia Civil police force said.

“The minor's signatures during police proceedings were exactly the same as those on their Swiss ID cards from seven years ago, the writing looks like that of a small child who has not developed his writing,” a spokesman for the Guardia Civil in Alicante told AFP.

According to police, the 17-year-old daughter managed to evade her mother's surveillance in August and send an email to the ANAR Foundation, which helps children in trouble and sounded the alarm.

She had allegedly been the victim of violence from her mother, who prohibited either of her kids to have any contact with the outside world.

She said they were only allowed out on the streets for a short while everyday for quick shopping errands or walks, but under strict surveillance.

Their 49-year-old mother, who is of Spanish origin, was allegedly particularly brutal towards her daughter, “hitting her, pushing her against walls or furniture and throwing cutlery or any other object she had in her
hands,” police said.

The daughter had not dared ask for help until then, as she “had been under constant threat of death from when she was little.”

Her mother “said on various occasions that she would kill them if they spoke to police and that police would rape and kill them anyway — an idea with which they grew up,” the Guardia Civil said.

In her ANAR email, the daughter said this situation had started back in Switzerland when she was only three or four, and had continued when her mother moved to Spain in 2009.

The mother's Swiss partner, 30, was also detained for covering up the situation.

After a foundation tip off, police tracked down the house where the siblings were living in the town of Catral.

“Agents went there immediately and the mother denied anyone was being held there, and also denied that any minor was living there,” the Guardia Civil said.

“The girl, who heard the agents speaking to her mother, started gesticulating in the corridor to attract their attention, and the two children were rescued,” it added.

The daughter has since returned to Switzerland to her biological father.

A judge decided to let the brother — whom police said was not the victim of violence like his sister — return to his home in Catral, where his mother and her partner have been released pending trial.