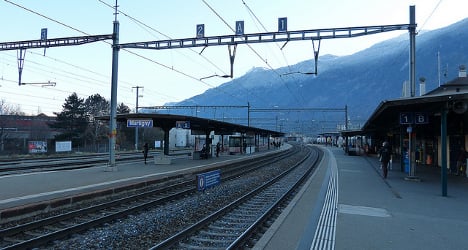 Swiss federal railways (SBB) provided replacement buses between the two Valais towns after the incident at around 11.30 on Tuesday morning, SBB said in a statement.

At the time of writing, it wasn’t known how long the line would be out of service.

The incident comes after two Paris to Geneva TGV-Lyria trains were damaged when they hit a wild boar on the tracks last week.

The first collision took place at around 6pm on Wednesday and happened at high speed, causing serious damage to the train, according to 24 Heures.

“The nose of the train was completely damaged and was scraping against the rails,” a TGV-Lyria spokesperson told the paper.

After an hour’s delay the train was able to limp slowly  to Bourg-en-Bresse, 70km north of Lyon, where customers were transferred to a bus for the rest of the journey to Geneva.

The same evening, a second Geneva-bound train hit a boar at Fort l’Ecluse, not far from the Swiss border.

Less badly damaged, it was able to continue its journey and arrived at Geneva 2.5 hours late, essentially due to the delay caused by the previous incident.

Customers travelling on the affected services can claim compensation for the delay by applying to SBB or French rail service SNCF.