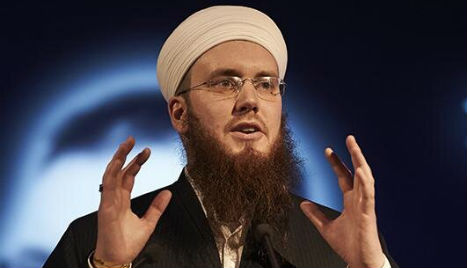 Nicolas Blancho, or Abu Ammar AbdUllah, as he appears on Twitter. Photo: Twitter
The office of Switzerland's attorney general confirmed in an email to AFP that Nicolas Blancho, of the Islamic Central Council of Switzerland (ICCS), was under investigation.
The ICCS slammed the move as “political” and said it was ready to “counter the accusations in a courtroom.”
Prosecutors opened the case last December, charging that an ICCS board member — German national Naim Cherni — had violated “the prohibition of groups like Al-Qaeda, Islamic State and similar organisations.”
He was suspected of creating “for propaganda purposes” a video from a trip into parts of war-ravaged Syria, “without having explicitly distanced himself from Al-Qaeda activities” in the country, last year's statement said.
On Saturday, the attorney general's office said its probe “has been expanded to the president of the ICCS and to one other ICCS committee member,” who was identified by the organisation as its spokesman, Qaasim Illi.
In an interview with the NZZ daily on Friday, Attorney General Michael Lauber said the case was “of high priority, because we want to know how far freedom of expression goes when it comes to criminal propaganda for a terrorist organisation.”
Cherni's video included an interview with a senior member of the jihad umbrella organisation Jaysh al-Fath (“Army of Conquest”), which counts as a member the Al-Qaeda-linked Nusra Front, which has renamed itself Fatah al-Sham.
He insisted the film was a documentary and was not meant as propaganda.
The ICCS has continued to promote the film, which remains accessible on YouTube. It has been viewed more than 100,000 times over the past year.
Lauber told NZZ he hoped the case would go before Switzerland's federal criminal court next year.
ICCS chief Blancho said in a statement on the organisation's website he would welcome his day in court to defend Muslims against “political bullying”.