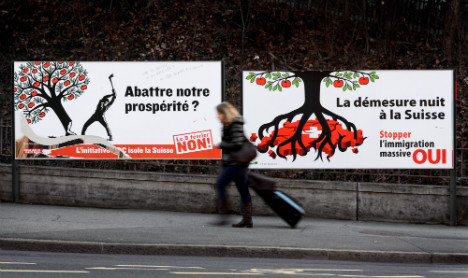 Posters for and against the 2014 initiative. Photo: Fabrice Coffrini/AFP

The Council of States adopted the plan on Thursday following a lengthy debate.

The right-wing Swiss People’s Party (SVP) argued for the immigration initiative, which it had pioneered, to be implemented as approved by the people. In a referendum in 2014, Swiss voters voted in favour of quotas on immigration from the European Union.

But by 26 votes to 16 with one abstention, the chamber opted for the ‘lighter’ version proposed by Müller, in the hope that it would prevent a confrontation with the EU.

This would require that companies report all vacant job positions to the state unemployment offices and, in the event that Swiss applicants are turned down in favour of foreign applicants, that they explain and justify their decision.

The system would only be enforced for professions and regions with higher-than-average unemployment.

Müller said his proposal would apply to several thousand job vacancies a year. Switzerland could no longer afford to bring in workers from abroad to fill positions in professions where there were large numbers of jobless.

The larger chamber, the National Council, will vote on the implementation of the immigration initiative next week.

Both houses have to give final approval before the end of the current session of parliament in two weeks time if Switzerland is to ratify the protocol on extending the free movement of persons agreement to Croatia.

Switzerland’s relationship with the European Union hinges on the principle of free movement of people. This principle forbids Swiss employers from giving Swiss applicants preferential treatment over applicants from the EU.

The SVP initiative that was approved by a referendum in February 2014 obligated Switzerland to set its own quotas for immigrants, putting Switzerland on a collision path with the European Union, which  warned that Switzerland cannot pick and choose its bilateral relations.

Under the constitution, the SVP initiative on curbing immigration has to be implemented by February 9th 2017.