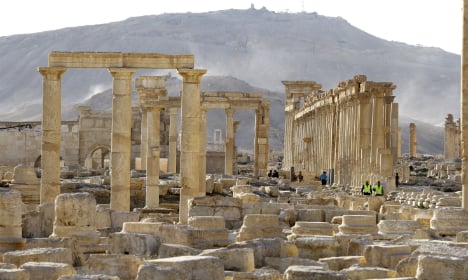 The artefacts were apparently deposited in the free ports in 2009 and 2010. Photo: Louai Beshara/ AFP

The free ports provide highly secured warehouses where basically anything can be stashed tax-free with few questions asked.

The confiscated objects, from the third and fourth centuries, include ahead of Aphrodite and two funereal bas-reliefs.

Most of the items reached Switzerland via Qatar and were taken by looters, Geneva's public prosecutor said in a statement.

They were deposited at the free ports in 2009 and 2010 and the alarm was first raised in April 2013 during a customs inspection, prosecutors added. It was not immediately clear when they were seized.

The customs office contacted the cultural authorities in Bern whose expert confirmed the artefacts were genuine, prompting the start of criminal proceedings in February.

Three of the pieces came from Palmyra, a UNESCO world heritage site devastated by Islamic State group jihadists who seized it in May 2015. The Islamists sent shock waves around the world as they systematically destroyed the central city's monuments.

Five of the confiscated objects were from Yemen.

UNESCO said Sanaa, known for its many Islamic sites and multi-storey ramme dearth houses, “sustained serious damage due to armed conflict” between Iran-backed rebels and the beleaguered Saudi-supported government.

The Aphrodite relic was from Libya and characterised “the Hellenisation of north Africa” the statement said.

While awaiting return to their countries of origin the archaeological contraband is being looked after by the Geneva Museum of Art and History where the relics will be put on public display.