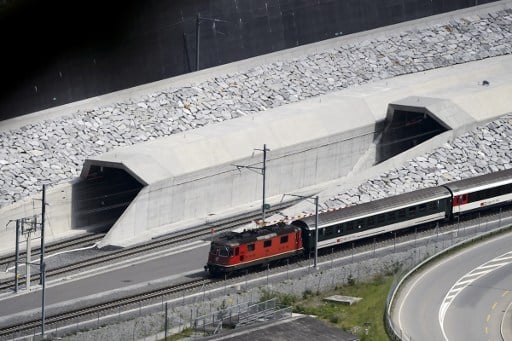 The first test trains travelled through the tunnel in June. Photo: Fabrice Coffrini/AFP

The Federal Transport Office (BAV) gave its authorization on Monday, it said in a statement.

The 12.2 billion-franc tunnel, the longest and deepest rail tunnel in the world, was handed over to SBB in June after an opening ceremony that made global headlines for its curious depictions of alpine culture.

Since then SBB has carried out a series of tests within the tunnel with a view to starting scheduled services this weekend.

Around 5,000 ‘test’ trains have passed through the tunnel in the past six months, said BAV.

Decades in the making, the 57-kilometre Gotthard Base Tunnel is part of a New Rail Link through the Alps (NRLA) including two other base tunnels – Lötschberg and Ceneri.

The new line will bypass part of the historic Gotthard railway line between the cantons of Uri and Ticino.

Able to bear longer, heavier trains, the tunnel will increase the capacity and speed of both freight and passenger trains.

Originally the plan was for passenger trains to run up to 250km/hr through the tunnel, however BAV has restricted that to 200km/hr for the time being.

“It’s usual that works as complex as this will be subject to operating restrictions,” BAV said.

Finishing touches at Rynächt, to the north of the tunnel, are still ongoing, meaning trains will travel at just 80km/hr in that region for now, it added.

These restrictions will be lifted in the coming months, it said.

There were be no repercussions for customers, as services will be able to maintain the previously stated travel times and capacities, added BAV.

Around 50 passenger trains and up to 260 freight trains will  travel through the tunnel every day, cutting the journey time between Zurich and Milan by around 40 minutes.

The start of scheduled services through the tunnel has required a timetable change across the country that will come into effect on December 11th, said SBB in a statement.

As for the old Gotthard train line, SBB intends to start running special panoramic trains on the route from April to October.

Passengers on the ‘Gotthard Panorama Express’ will travel from  Lucerne to Flüelen by boat before boarding a panoramic train for the journey to Ticino.

In other rail news, the Swiss federal government has agreed a 13 billion franc boost for Swiss railways over the next three years.

The budget, already approved by the Swiss upper house of parliament, was passed by the lower chamber on Tuesday, news agencies reported.

The majority will be dedicated to improving infrastructure, while the rest will go toward operating costs.