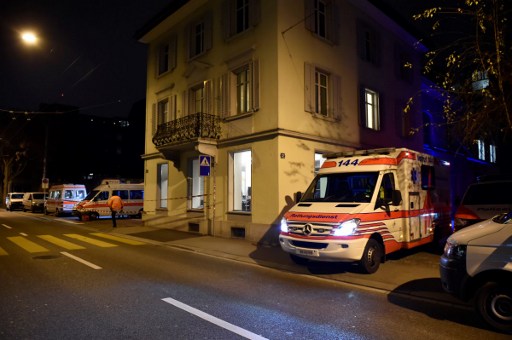 Ambulances and police outside the Islamic Centre. Photo: Michael Buholzer/AFP

The shooting, it said, was “an alarm signal” that should prompt action to ensure that “Islamophobia is pushed back to the margins of society, where racism and anti-Semitism once were relegated”.

It called on Swiss authorities to dish out public funds to secure mosques and other Muslim institutions.

A 24-year-old Swiss man burst into the Islamic Centre in Zurich and opened fire on Monday evening, injuring three worshippers, aged 30, 35 and 56, who were among around a dozen people inside at the time.

The assailant then committed suicide and his body was found on a nearby river bank, police said.

The unnamed gunman had stabbed a former friend to death at a playground only the day before.

Police had secured DNA evidence at the scene of the playground killing and were able to match it with DNA samples taken seven years ago from a youth who had stolen a bicycle.

But despite having identified the murderer and deploying numerous resources to find him, police were unable to track him down before Monday's shooting, police said.

According to investigators, there was no indication that the gunman had any links to terrorism or far-right movements. He also had no known connection to the Islamic Centre.

They said it remained unclear if he was suffering from mental problems.

The three injured in the shooting are in a stable condition in hospital.

Monday's shooting was not the first such attack in Switzerland.

In 2004, a Frenchman suffering from serious psychological problems stabbed the imam at a Lausanne mosque as he spoke before some 200 worshippers.

And in 2007, a 23-year-old Swiss Muslim, also suffering from psychological issues, opened fire in a Muslim prayer hall in Crissier, not far from Lausanne, seriously injuring one worshipper.