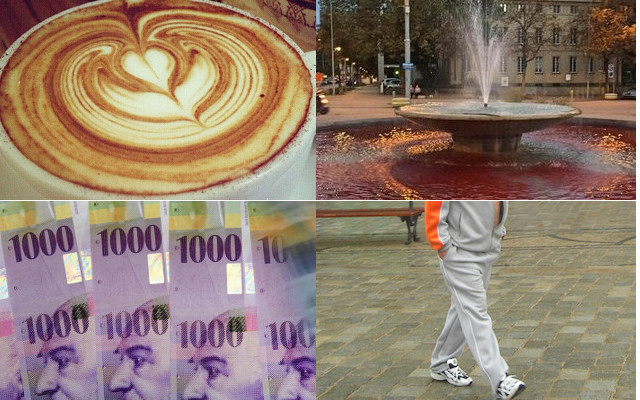 Photo: The Local
It’s certainly been an eventful year. As Switzerland grappled with how to implement EU immigration controls, Britain decided to leave the EU and the US voted in businessman Donald Trump as President.
The Local covered all these stories from a Swiss perspective, interviewing British and American expats in Switzerland and reporting how Swiss-EU relations progressed throughout the year.
And yet none of those were The Local’s most-read news stories of the year. Instead, you were most interested in these…
1. Geneva to get fellatio café by the end of the year
The Local’s most read story of 2016 was the news that an entrepreneur planned to open a café in Geneva where customers could get oral sex with their coffee. As the year went on, we heard that Bradley Charvet planned to use sex dolls instead of human prostitutes to work in his controversial café. However, as we come to the end of 2016 it appears his plans have not yet been approved by Geneva authorities and there is no date set for the grand opening.
2. Drone shocks nudist at Swiss water park
Drones were often in the news this year, as a Swiss startup launched a drone service to help farmers and Swiss prisons brought in measures to stop drones delivering contraband to inmates. But it was our story about customers at a Bern waterpark spotting a drone hovering over a nudist sauna area that you were most interested in, making it the second most read story of the year.
3. Swiss army ready to act in worst case migrant scenario
Immigration has been at the forefront of Swiss news all year, but this story about the federal government’s plans to use the army to help out at border crossings certainly piqued readers’ interest more than most. As it turns out, the ‘worst case scenario’ the government planned for hasn’t occurred; in fact fewer asylum seekers have arrived in the country this year than predicted.
4. Tampon tax protest turns Zurich fountains red
When Zurich’s fountains were turned red by feminist activists, their dramatic and very visual statement certainly provoked the desired column inches. They were protesting about the fact that tampons and other sanitary products are considered luxuries instead of essentials, and therefore taxed at a higher rate — an issue protested by women in Britain, too.
5. Sweatpant-wearing family denied Swiss passports
We all know how strict Switzerland’s citizenship rules are. And in June one example showed exactly how pernickety the authorities can be when a family from Kosovo, long-term residents in Switzerland, had their application refused because, among other things, they wore jogging bottoms around town – and that’s just not Swiss enough, apparently.
6. Swiss to vote on guaranteed income for all
One of the biggest ongoing stories of the year was Switzerland’s referendum on an Unconditional Basic Income. Under the plans, every adult in Switzerland would have been entitled to a basic income of 2,500 francs a month – without having to work a single day. Unfortunately for those who thought this sounded like utopia, the idea failed to win over voters in June, with many criticising the lack of detail in the proposal. But proponents remain convinced that one day, a UBI will be essential for Swiss society.
7. Swiss space firm boss left badly injured in violent attack
It was a shocking attack that horrified us all: Pascal Jaussi, the CEO of Swiss Space Systems (S3) was violently attacked and left for dead in a forest in Fribourg in late August. Thankfully he survived. However the year continued to go badly for S3 and the company was declared bankrupt in December.
8. Swiss populist attacked by knife wielding pensioner
Another violent attack made headlines in September when Christoph Blocher, considered the architect of Switzerland’s largest political party, the right-wing Swiss People’s Party (SVP) was accosted at a Zurich hotel by an 81-year-old carrying a knife. The OAP was quickly arrested.
9. Spectacular video shows Swiss avalanche danger
As snow finally arrived in Switzerland last January, a video posted on YouTube showed an avalanche barrelling towards a road near Randa, north of the ski resort of Zermatt. Thankfully no one was hurt.
10. KFC set to open restaurants in Switzerland
Judging by the popularity of our tenth most-read news story of the year, many of you are big fans of the Colonel. Yes, back in January we reported that the American fast-food chain KFC was planning to open half a dozen outlets in Switzerland over the next few years. So Switzerland-based fried chicken fans will no longer have to nip over the border to Germany to get their fix.