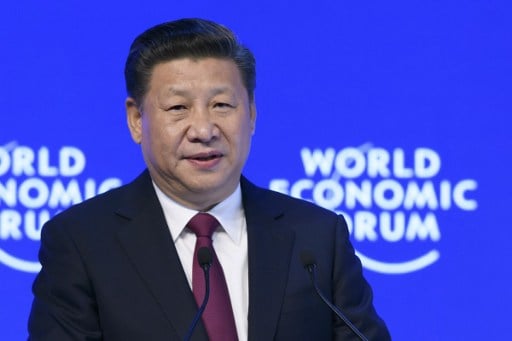 Photo: Fabrice Coffrini/AFP
The global economic order has been led for decades by the United States but the president-elect is threatening to tear up the rule book and Xi used his debut appearance at the World Economic Forum in Davos to insist that globalization was irreversible.
“Pursuing protectionism is like locking oneself in a dark room. Wind and rain may be kept outside, but so is light and air,” Xi said in a speech that took in references to Chinese folklore, Charles Dickens and Abraham Lincoln's Gettysburg Address.
It is simply “not possible” to reverse the flow of global capital, technology, goods and people, Xi said in the heart of a continent where Britain is plotting its exit from the European Union and far-right parties are on the rise.
He insisted China was committed to “opening up” and stood by globalization's gains for emerging economies — as well as defending the Paris accord on climate change, which is also in Trump's sights.
And he said there is “no point in blaming economic globalisation for the world's problems”, highlighting China's view that catastrophically weak regulation rather than free trade lay behind the West's 2008 financial crisis.
His message was met with acclaim from many in a hall packed with government leaders, captains of industry, stars of entertainment and agenda-setting thinkers.
Former Swedish prime minister Carl Bildt noted that a century ago, Russian Bolshevik leader Vladimir Lenin was plotting world revolution in Zurich, a couple of hours' train ride from Davos.
“And now, 100 years later we have the leader of the largest communist party in the world coming to the leading meeting of global capitalists to preach the virtues of globalization,” he told AFP.
“Lenin is dead.”
Xi's keynote address kicked off four days of networking and partying by the global elite in the Swiss ski resort, in a week that climaxes with Trump taking office after a campaign that blamed China and globalization for the loss of millions of US factory jobs.
The Republican property tycoon's signal pledge is to “Make American Great Again” but Xi warned: “No one will emerge as a winner in a trade war.”
Playing to the gallery
In Davos, Trump transition advisor Anthony Scaramucci said “we want to have a phenomenal relationship with the Chinese”.
“But if the Chinese really believe in globalism, and they really believe in the words of Lincoln, they have to reach now towards us and allow us to create this symmetry, because the path to globalism in the world is through the American worker and the American middle class,” he said.
For his part, like Xi, departing Secretary of State John Kerry defended the possibilities of globalization while taking implicit swipes at Trump.
“It's really dangerous to play to the lowest common denominator of American, of global political life,” he said.
Conscious of the sour public mood in the West, organisers are billing the Davos meet as “a call for responsive and responsible leadership”, and top business executives agree that they must not appear oblivious to the anger of ordinary people.
“The advantages of globalization are more clear in emerging markets than in developed countries. We have to listen, to help people that are concerned,” Sergio Ermotti, chief executive of Swiss banking giant UBS, told AFP.
A World Economic Forum study said that within advanced economies, median per capita income fell on average 2.4 percent over the past five years, helping to explain why disaffection is so high across the West.
Other research presented by the consultancy Edelman found public confidence in institutions including in governments, business, the media and NGOs slumping across the rich world.
Philip Jennings, general secretary of the UNI Global Union, demanded governments commit to spending the same funds on retraining workers as they do on defence.
“This needs a massive injection of political will and adrenaline,” he told one of hundreds of panel discussions taking place this week in Davos.
Trump promises just such a shot in the arm for US labour, and China along with the Davos elite will be watching his inauguration Friday attentively to see what the future holds as he rips up the pro-globalization consensus.