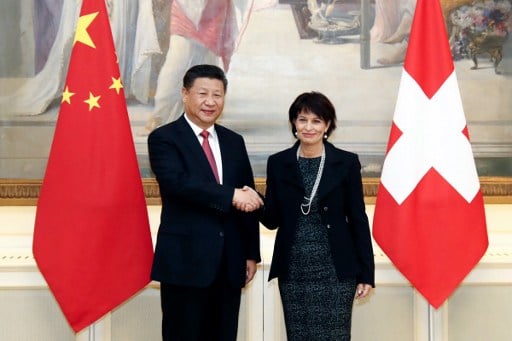 Photo: Peter Klaunzer/Pool/AFP
The two countries agreed to deepen the ‘strategic partnership’ Switzerland signed up to last year by inking agreements and protocols on free trade, innovation, international cooperation, culture, energy, sport and intellectual property, said news agencies on Tuesday.
China has been Switzerland’s biggest trading partner in Asia since 2010 and is its third largest in the world, behind the EU and the US.
The new agreements will broaden the free trade deal signed by the two countries in 2014.
Also on Monday, the University of Geneva and Tsinghua University in Peking – where Xi himself studied – announced their intention to launch a joint masters degree programme in September related to the sustainable development objectives of the UN.
The state visit of China’s president accelerated the signing of the agreement after the idea was first touted last year, Geneva University’s rector Yves Flückiger told Le Temps.
The two-year programme will include a year in Switzerland and a year in China, and is open to 30 students from each country.
Speaking at a joint press conference in Bern, Xi Jinping and Swiss President Doris Leuthard were pressed by the media on the issue of human rights.
“This topic was broached, but we will not be making public the details of our discussion,” said Leuthard.
She added that the issue of human rights was perceived differently by the two countries and spoke of a “process”, saying things wouldn’t change overnight.
Xi did not respond to questions.
On Tuesday Xi and Leuthard will head to Davos to jointly open the World Economic Forum’s annual meeting. Xi, the first Chinese president to attend the event, is expected to talk trade in his address.
China’s richest man, Jack Ma, will also be at Davos.