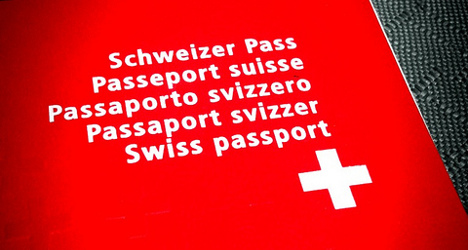 File photo: Martin Abegglen
All youth parties except the rightwing SVP are in favour of the initiative, which would make it easier for young foreign nationals born and bred in Switzerland to become Swiss, reported news agencies.
On Tuesday they urged the country to vote yes in the referendum on February 12th, saying it was “an action by young people for young people”.
In Switzerland citizenship is not automatically conferred upon people born in the country to non-Swiss parents.
At the moment third generation foreigners – meaning those whose grandparents arrived in Switzerland as immigrants – must apply for regular naturalization to get Swiss citizenship, a lengthy process involving the cantons and communes where the person lives.
If the applicant moves to another commune during the process, they may have to start proceedings again through their new commune.
Facilitated naturalization cuts out some of the bureaucracy and mainly involves the federal authorities. This simpler process is much more suited to young people who frequently move communes for work or study, argued the youth parties.
“A ‘no’ on February 12th would amount to a ‘no’ to our friends,” said Marcel Erhard of the youth Conservative Democrat Party (BDP), adding that he considered people who were born and bred in Switzerland to be citizens like everyone else.
For some the bill doesn’t go far enough, since those concerned must still apply for facilitated naturalization rather than getting it automatically.
The applicant must meet strict conditions relating to their parents' and grandparents' residency status and schooling, and must be under 25.
Young socialist Tamara Funiciello, herself the daughter of Italian immigrants, told the media she wasn’t satisfied by the text but that it was a step in the right direction.
She encouraged all dual Swiss-Italian citizens to vote on February 12th, since the majority of people affected by the bill are Italian nationals born in Switzerland.
According to federal statistics, in 2015 there were 396,600 foreigners living in Switzerland who were born in the country.
Of those, over 100,000 were Italians, 50,000 Portuguese, 33,000 German and nearly 15,000 French.
Those figures include both second and third generation immigrants.
Second generation foreigners can only apply for citizenship through the regular naturalization process after 12 years of permanent residency (with the ages 10-20 counting double).
Currently, the facilitated naturalization process is used for the foreign spouses and children of Swiss citizens.