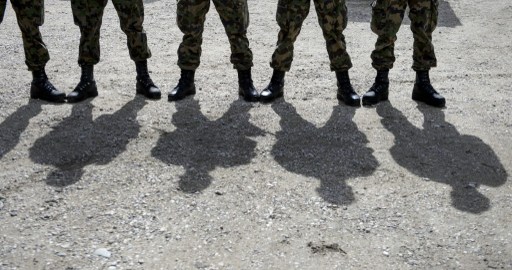 File photo: Fabrice Coffrini/AFP
Army spokesman Walter Frick confirmed to news agency ATS that the army was taking disciplinary action against the soldiers, who have been detained for an unspecified number of days.
An investigation has been opened to determine if the soldiers have broken laws on racism.
If it is found that they have, they could face up to three years in jail.

The six were identified last week, shortly after the photo was sent to Sunday paper SonntagsBlick.
Speaking to the paper, Martine Brunschwig Graf, President of the Federal Commission against Racism, said that regardless of the legal situation, “the behaviour of these young men was scandalous”, particularly because they are members of the army.
Brunschwig Graf told the paper she intended to meet with representatives of the army to talk about how right-wing extremists could be better identified during the recruitment process.
The army has given no information as to the motive of the soldiers photographed.