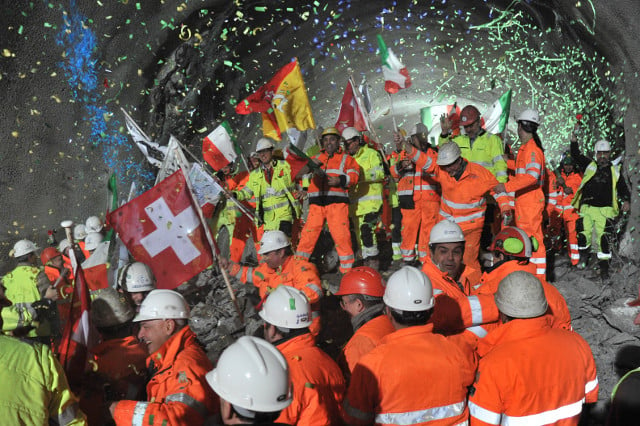 Workers celebrate the breakthrough of the Ceneri tunnel in early 2016. Photo: Alptransit/Gottard
The Ceneri tunnel is part of the same new rail line as the Gotthard base tunnel, the world’s longest and deepest rail tunnel, that opened amid much fanfare last June.
Together with the Lötschberg tunnel – which opened in 2007 – the three new tunnels will complete a New Rail Link through the Alps (NRLA), a flat rail route through the Swiss mountains that bypasses the old Gotthard alpine railway line dating from the late 19th century.
The 15.4km Ceneri base tunnel may be significantly shorter than its big brother, the 57km Gotthard, but it is no less important to the project.
The twin-tube tunnel will pass under Monte Ceneri in the canton of Ticino. Together with the Gotthard it will allow a continuous flat route from Altdorf, at the end of Lake Lucerne, all the way to Lugano. It is Switzerland’s largest tunnel construction project after the Gotthard.
Construction company Alptransit began blasting on the Ceneri in 2007 and the first breakthrough took place a year ago.
Now, with the tunnel’s internal construction nearly finished, from this summer workers will begin to fit the rail infrastructure, Alptransit told the media on Tuesday.
Due to be completed in 2020, the Ceneri will contribute to shortening the journey time between Zurich and Milan by nearly an hour.
The project also includes a new link between Locarno and Lugano, reducing the travel time between the two Ticino cities from 55 minutes to 22 minutes.
As well as faster travel times for passenger trains, the NRLA will allow heavier and more frequent freight trains to pass through the Alps, an important trade route.